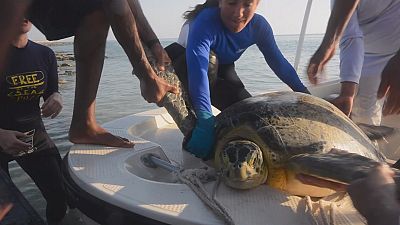 Chasing the Green Turtle off the coast of the Gulf.

A trained marine specialist jumps into the sea to capture a turtle. But it’s all for the good cause: over the next four years the Emirates Wildlife Society in association with the WWF will gather scientific data on green turtles in order to identify critical marine habitats that need to be protected and help conserve this endangered species.

“This is an amazing catch, these turtles tell us how many males and how many females are in the population and (allow us to) make sure that everything is healthy. How can you do that anywhere else? Eight turtles in 35 minutes!” says Nicholas J Pilcher, executive director of the Marine Research Foundation.

We are off the shore of Bu Tinah island, in the Marawah Marine Biosphere Reserve, an hour and a half by speedboat from Abu Dhabi. The whole region is well known for its rich sea turtle population and biodiversity.

The aim of the Gulf Green Turtle Conservation Project is to gather crucial data on the migration, health and numbers of turtles. It is designed to provide robust scientific data from which strategies can be designed to address threats to marine species, rather than solely focusing on fragmented national and local actions that do not benefit highly migratory species such as turtles and marine wildlife.

The world’s sea turtle population has declined dramatically due to human action including the loss, degradation and pollution of nesting beaches and habitat, climate change, coastal development and poor fishing practices.

Green turtles are a migratory species that depends on a myriad of locations and habitats for survival as they move between shallow undersea feeding grounds, open ocean and nesting beaches. Because they depend on more that one habitat, their status and numbers can tell us a lot about the health of the marine environment.

“What I am doing here (she glues a transmitter onto the top of the turtle’s shell) is I am deploying a satellite tag on this turtle. The tag is going to go into the water (with the turtle). As soon it hits the water, it’s going to start sending a signal to the satellite and we are going start receiving information on where this turtle goes and what it’s actually doing. So we will see information on the migration route and possibly the areas that she is going to visit on her journey,” says Jimena Rodriguez, Marine Project Manager at EWS-WWF.

Sea turtles spend 95 percent of their lives at sea and only brief periods on beaches for nesting. Researchers are hoping to learn more about their feeding and behaviour at sea.

“The species we are working on in this project are green turtles which are associated with sea grass habitat. And this habitat is not only important for marine turtles but also for marine life in general. And what we want to do by using marine turtles is to identify important areas for biodiversity that can be conserved for the whole marine ecosystem,” says Marine Antonopoulou, Conservation team leader at EWS-WWF.

“The interesting thing is the climate projections, so what we expect the planet to be in the coming 50 or 100 years the Gulf is already experiencing this today,” says the Marine Research Foundation’s Nicolas Pilcher. “In many ways, this is like a living laboratory for studying how climate change can impact marine species.”

Sea turtles have roamed the Earth’s oceans for the last 100 million years. They have survived dinosaurs and have a great capacity to adapt. By learning about marine turtles, the hope is we will understand more about the state of our seas in order to better protect them in the future