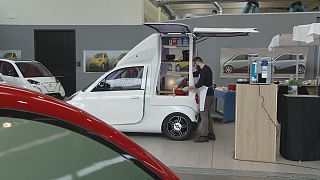 Electric vehicles are a reality, and scientists are now looking ahead. They are exploring new frontiers to make them safer, more reliable, more autonomous and more affordable.

Manufacturing should be tailor-made. Tell us where you want to produce the cars. We come with our trucks with containers. Inside the containers you have robots ready to assemble the car. So in just a few days you are able to produce electrical cars that we consider safe, reliable and efficient

European researchers are not short of ideas to address all those issues.

An electric vehicle has, say its developers, been designed to suit all tastes. Not only because its solar cells feed its electric batteries. But also because the vehicle itself is able to provide some food.

Most cars, electric or otherwise, have boots designed to carry luggage. But one new vehicle has
microwaves and frying pans instead.

This is hardly run-of-the-mill research equipment, but it is integral to a prototype just developed at one Italian lab.

“This is an electric restaurant car. We wanted to show that by just using photovoltaic energy you can not only drive the vehicle, but also power a kitchen and be able to cook in an ecological way,” says IFEVS’sCEO, Pietro Perlo.

The prototype has been designed by scientists at a European research project aimed at exploring new innovative ways to design and produce modular urban light electric vehicles.

The tiny food van is the latest newcomer in a game that also includes small pick-ups, vans or even taxis.
They all share the same concepts for the chassis, the powertrain and energy-driven technologies.

“Our car is modular. We always have the same chassis based on a mix of very high resilient steel. The car has 4 powered wheels. It has two motors, one in the front, another in the back. Each motor feeds two of the wheels,” says Perlo.

These modular cars have been designed with simple elements to simplify assembly and reduce costs.
But they will have to be as safe as any other vehicle in the market. So researchers had to turn to new
solutions for its conception.

“We are talking about very small cars. So we have much less space to absorb energy. So we decided to use a special steel. It is a very elastic steel, really innovative. Its biggest advantage is that this steel absorbs big quantities of energy,” says Mechanical Engineer at CIDAUT, Javier Romo García.

The car´s two motors were made with magnets instead of rare earth materials to reduce costs. Each
motor delivers 9000 rpm to the wheels, according to its developers.

“Requirements for this kind of electrical traction are basically high efficiency, high power density and constant speed. This is what we tried to develop. The fact that the car has two motors offers some advantages. Two motors gives more flexibility to the vehicle, and it improves its acceleration performance.
These are the main advantages,” says Regulated Environment Protection Installation Electrical Engineer, Paul Minciunescu.

Researchers are now testing the model’s reliability and ergonomics.

Details like visibility, handling, on-board sensing or computational power are closely studied at these European labs.

“Our aim was to develop a really hi-tech vehicle, with state of the art technology, that has the safety of a plane for the cost of a washing machine. In the 90s the big challenge for technology developers was bringing a cell phone into every home. Our challenge now is to bring one of these cars to the garage of every European,” says Bitron/Plus-Moby project coordinator Marco Ottella.

While continuing to work on sometimes tasty validation tests, researchers say they are now getting ready for the next big step, full-scale manufacturing.

“Our idea is that manufacturing should be tailor-made. Tell us where you want to produce the cars. We come with our trucks with containers. Inside the containers you have robots ready to assemble the car. So in just a few days you are able to produce electrical cars that we consider safe, reliable and efficient, vehicles that are only powered with renewable energies,” says Pietro Perlo.

Researchers hope their modular vehicles could be ready for industrial manufacturing in less than 2 years.

Guaranteeing the safety and technical reliability of these existing and future electric cars, and also their charging points are the questions that European scientists are addressing from one sophisticated lab in Northern Italy.

The lab includes a novel electric and hybrid vehicle testing facility; a climatic chamber with temperatures ranging from -30ºC to +50ºC under controlled humidity.

Researchers are able to get information about the car’s performance and efficiencies under different drive-cycles and climatic conditions, including the impact of heating, ventilation or air-conditioning.

And there is more…

“We measure information on electrical data, information on the ratio between the car’s emissions and its consumption. We also obtain information about the car’s own consumption of electricity, and how its battery behaves,” says Telecommunications Engineer at the EU’s Joint Research Centre Germana Trentadue.

They can also test the immunity of electric vehicles against external electric and magnetic fields.

But why is it important to measure the electromagnetic fields around the vehicle?

“Electro-mobility is a very young field of research. And it involves technical equipment where certain fears need to be addressed, and methods need to be developed to rule out problems in the future with certainty. These include for instance very low-frequency magnetic fields in the fast charging area, which could, under certain circumstances, pose a risk for pacemaker patients, and of course we want to exclude such issues from the very beginning,” says the JRC’s Coordinating Research Engineer for Electro-mobility, Harald Scholz.

Research is complemented by testing the interoperability all supply devices and communications systems involved in electric car recharging.

“Take for instance a future mobile app that will allow us to book a charging point for our electrical car. So you book it, you drive there, you recharge your car and you leave with your battery totally full. This may look like a very simple process; it takes just around 30 minutes to do all that. But it needs between 10 and 15 different agents, systems and components that must all work together in real time. This is very complex, and this is what we are trying to ensure in our labs; that all these different technical components work well together,” says Telecommunications Engineer at the JRC, Miguel Olariaga Guardiola.

Information acquired at these facilities should make the establishment of standards and harmonized criteria easier, to guarantee safety and reliability in future electric vehicle and recharging markets.

Ecological and more and more sophisticated, electrical vehicles are a dream for some people, but their limited range is a huge challenge. Most existing vehicles on the market still cannot go very far on one charge. It is a challenge that some European scientists say they are addressing with the help of a trailer.

Researchers have developed a portable generator housed in a little two-wheeled trailer. It can be
programmed with a mobile app.

The generator produces energy to “bolt on” to the electric cars to increase their range. The energy is
provided by petrol.

“If you are driving at 100 kph on a highway, an average electric car offers you around 100 kilometres of autonomy. With our prototype you can drive 500 kilometres. Then you fill up with petrol and you can keep on driving,” says EP-Tender’sCEO, Jean-Baptiste Segard.

Is it not a curious paradox that at the end of the day you need gasoline to produce energy for an electric car?

“Yes it is a true paradox. But during the year, with an electric vehicle you are going to drive short distances almost all the time, so those 20 or 30 kilometre trips you drive with your batteries. But if you ever want to drive 500 kilometers, you use our product, powered with petrol. But how often do you drive 500 kilometers? 3, 5, 10 times per year?” asks Segard.

The trailer is around 1.2 meters long. It weighs some 250 kilos and provides a peak power of 20kW.

Scientists say it has some sophisticated electronics onboard.

“We had to find the right processor and the right systems. And then we had to make sure that the algorithms that we had imagined on paper worked in the real product,” says EP-Tender’s Embedded Systems Engineer, Fabrice Viot.

Production of the first units was done at this small French company.

Researchers here say the product is fully ready for industrial assembly lines, after multiple manufacturing challenges were sorted out.

“This is a complex product with a combustion engine and power electronics in a very small, closed environment. There are very different components with really complex functions. And this reality imposes important constraints for the mechanical integration of the product,” says Adaccess’s CEO, Damien Alfano.

Back on the road, the trailer’s developers are already working on a business model, based on a rental basis, they say.

“We are not planning to produce one of these trailers for every electric vehicle. We don´t want to add a motor to each electric vehicle. Maybe there will be one trailer for every 10 or 20 electric cars. And each driver will just rent it when he or she needs more range,” says Segard.

The key question is how much this will cost.

Researchers say they expect the product to hit European roads in less than 3 years.