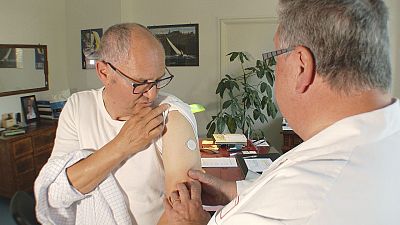 Alain Lehmann, type 1 diabetes patient: “It’s a pernicious disease that can become perverse, because you never expect it to come.”

Seppo Kopsala, industrial engineer & CEO, Optomed Oy: “Diabetes is the disease causing more costs for society than any other disease in the world. The complications of diabetes are very bad.”

Michel Pinget, endocrinologist, CHU Strasbourg: “The number of cases has been multiplied by thirty in the last five years.”

Séverine Sigrist, scientific director, CeeD-European Center for the Study of Diabetes/BIOSID project coordinator: “Diabetes is the only non-contagious disease for which we use the term ‘epidemy’.”

Julián López Gómez, euronews: “Diabetes is one of the main public enemies in Europe. According to some studies, this elusive disease affects up to 62 million people, almost 18 percent of the European population. Researchers are inventing groundbreaking tools to introduce new treatments, more accurate early detection and better education in the prevention of the disease.”

It’s just another hard training session at a gym at Dublin City University. Here, individuals at high risk of developing type 2 diabetes volunteer to see how exercise can delay – or even prevent – the onset of the disease.

Des Nix, programme volunteer: “Essentially I came here in relation to my heart problems. But I’ve discovered that I seem to control my diabetes much better as a result as well.”

Adds another volunteer: “I really believe that if I wasn’t coming to this programme I’d be seriously ill now. Or maybe even dead, you know. I think my health would have fallen back so much that I would be curled up in a ball in bed.”

Scientists at Dublin City University are involved in a European research project to track the volunteers’ physiological improvements.

Research has confirmed that regular exercise and a healthy lifestyle can prevent the development of the disease in high-risk individuals.

Donal O´Gorman, exercise physiologist, Dublin City University: “Patients lose body weight, they lose body fat. We can improve their fitness levels. And we’ve seen improvement in things like their glucose levels, which is obviously a major risk factor for the development of type 2 diabetes.”

This conclusion was not a surprise to Christian Petersen and Lone Lindborg.

Both of the Danes have type 2 diabetes. They often share their experiences with newly diagnosed patients at a local clinic. The disease caught them each off-guard.

Christian Petersen: “I was 18 when I was diagnosed with type 2 diabetes. I remember they called it the “old man disease”, but I did not think of myself as an old man, just a normal guy with something a little bit extra on him.”

Lone Lindborg: “I had a shock when I was diagnosed. I didn’t know what to do. The doctor told me to eat less. I did some exercise, like swimming… But I didn’t do anything at all sometimes because it was very hard for me.”

It remains a challenge to effectively identify those at high risk of developing diabetes so they can be better informed in disease prevention.

John Nolan, CEO, Steno Diabetes Center/DEXLIFE project coordinator:
“Our project is aiming to dig into the deeper levels of the biology of type 2 diabetes to see if we can find in the blood tests, or in some other modified tests, quick ways of forecasting that, yes, this person is at high risk and should have preventive treatment, or this person is at very low risk.”

Scientists in Denmark are working to identify new disease markers other than glucose levels in the blood, and almost three years of lab analysis has paid off.

Matej Oresic, biophysicist, Steno Diabetes Center: “We have been focusing for example on the lipids, or fats, and have indeed identified several individual molecules that can predict onset.”

John Nolan: “Medicine is moving from a more general approach to a much more personalised approach. My hope is that our research will really help people with diabetes or people who are at risk of diabetes of getting a much, much more personal service from medicine.”

Julián López Gómez, euronews: “How can we detect diabetes? Here in Finland scientists are developing systems to guarantee early discovery of the disease… via the eyes and the feet.”

Optomed Sy, an optical research lab change, has a new outlook on how to detect diabetes.

Engineers here believe diabetes can be diagnosed by closely monitoring the eyes and the skin.

Seppo Kopsala, industrial engineer & CEO, Optomed Sy: “It has a megapixel sensor. It has our own imaging algorithms. For this special project we have modified the optical and illumination parts of the camera.”

The optical equipment was combined with ultrasound and thermal technologies to provide scientists with complete sets of images that can signal an early stage in disease development – and prevent eventual disabilities in the patients.

Seppo Kopsala: “The different colors enhance different features in the patient’s skin. By making the documentation, not only with standard colour images but separately with all three different colour channels, red, blue and green, we’ll be able to highlight those changes more accurately and with a different detail.”

Julián López Gómez, euronews: “And finally, how can we improve the existing treatments? Here in Strasbourg, researchers are working to develop the next great revolution in the treatment against type 1 diabetes. And their secret weapon is a bioartificial pancreas.”

Lack of insulin leads to increased blood and urine glucose.

Alain Lehmann: “My diabetes was diagnosed during my military service. I was 24 years old, 36 years ago. A simple urine test detected I had too much sugar in the blood. From that moment the world collapsed a little.”

As with other type 1 diabetes patients, Alain depends on daily insulin injections to control the glucose level in his blood.

An effective treatment. But it does have important limitations.

Michel Pinget: “We must try to provide this insulin to the patient more or less like the pancreas would have done if it would have continued to work. We know that the pancreas creates lots of insulin during each meal to stock the glucose in food. And on the contrary, it creates less insulin in between meals, especially at night, to control sugar production by the liver.”

The development of a bioartificial pancreas is the aim of project scientists at Defymed, a French research centre.

Their idea is to introduce in the patient’s body a biocompatible membrane complete with cells able to secrete insulin.

Richard Bouaoun, biologist, Defymed: “Sugar will be able to pass through this semi-permeable membrane. It will then signal its presence to the cells stocked inside the membrane. These cells will be able to create the necessary amount of insulin to return sugar levels in the blood to normal.”

Cellular therapy has the advantage of being autonomous, researchers say. The system activates itself when glucose levels rise.

The main challenge for scientists is to increase the survival of these therapeutic cells in a closed environment.

Elisa Maillard-Pedracini, biologist, CeeD-European Centre for the Study of Diabetes: “We really need to find molecules that will help us optimise the presence of oxygen inside the bioartificial pancreas. Then we’ll have to address other issues. But nothing is as deadly as lack of oxygen inside the membrane.”

Scientists see their research as a much needed alternative to pancreas transplants.

Séverine Sigrist: “Even if we had at our disposal all the pancreases potentially needed for transplants, we could treat just 0.01% of patients living with type 1 diabetes, which accounts for just 10% of the population of patients, a minor number. So our idea is to address this problem through a physiological approach, a cellular approach, that can be helpful for all patients.”

Pending technological developments and clinical tests, researchers expect the
bioartificial pancreas to become a reality around 2019.

Michel Pinget: “This is clearly the road ahead. The disease will always be here. But with this system we can ensure a long-term, easy treatment for patients. A treatment that would also be safe and free of side effects.”

Patients and high-risk individuals say they hope scientific breakthroughs in prevention, detection and treatments will further improve their quality of life.

Barbara Cahill, programme volunteer: “Exercising just makes you feel better. In every aspect, even down to your looks. You kind of feel different. You lose a bit of weight as well, which is a benefit. It’s great.”

Christian Petersen: “The thing I want to do is to climb a mountain. I think my life is quite normal. I think my life became more healthy after I was told I had type 2 diabetes… instead of just being this lazy boy who I was when I was 18.”

Lone Lindborg: “It took me almost 10 years to learn how to deal with diabetes. Nowadays I’m running a lot and exercise a lot.”

Alain Lehmann: “Either in the night or morning or in the afternoon I run, I do sports, like tennis. The disease does not put any limits on my life. I have no limits.”

Do you know: can sport prevent diabetes?