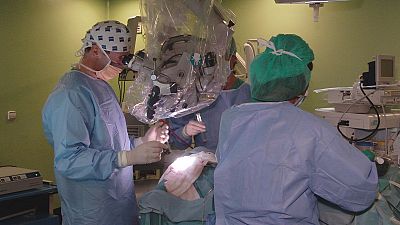 Leaving as much healthy tissue intact as possible is obviously of great importance when operating to remove brain tumours. To find out how neurosurgeons be helped to achieve this, Futuris went to Las Palmas de Gran Canaria, in Spain.

Adam Szolna is a neurosurgeon at Negrín Hospital: “We often can’t see accurately how much of the brain is actually affected by the tumor. So we don’t know how much to. And that is a real issue, because brain tissue does not regenerate. Brain damage is irreversible.”

So telecommunications engineers are testing a prototype hyper-spectral camera, at the hospital. It is designed to help neurosurgeons to see details that they can’t see with existing technologies, said Himar A. Fabelo, a telecommunications engineer from the University of Las Palmas de Gran Canaria: “We can clearly distinguish the brain tissue affected by the tumor, shown in red, from the healthy regions, shown in green. We can also help differentiate other anatomical details, like veins, for instance, that we see in blue.”

The help is much needed by neurosurgeons, who often have to trust incomplete, dated or inaccurate data produced by techniques, like magnetic resonance or computed tomography, which is not always accurate, said Adam Szolna: “We work with visual information about the brain tumor, gathered before surgery. But meanwhile brain tissue can move, can reposition itself; and a tumour’s dimensions can also evolve. WIth these images taken during surgery, we know the location of the tumour tissue for sure.”

Scientists from a European research project developed the hyper-spectral cameras in electronics labs like this one. Whereas a conventional camera captures images in three colour channels – red, blue and green-, a hyper-spectral camera captures data over a large number of spectral bands. That has multiple advantages in brain surgery, researchers say.

Gustavo Marrero Callicó says the technique has several advantages: “It is a completely non-invasive technique; we don’t need to inject contrast agents. It is also a non-ionizing technique, so we don’t change the properties of the brain tissue. And it provides the surgeon with lots of information, in real time during surgery.”

Real-time is a key issue; scientists aim at providing neurosurgeons with processed images in less than 1 or 2 minutes. That needs advanced computing tools, said Eduardo Juárez. “We are working with machines whose processors team up to reach a certain specialization. That way processors become really effective in dealing with the algorithms that decide which brain tissue is affected by a tumor and which is not.”

Scientists hope the technology will be ready in around 2 years. After lengthy and complex clinical trials, it could be on the market in around 5 years, they say. And according to Adam Szolna, they already have some plans. “We hope that in the future these cameras will be much smaller, so we can embed them into surgical microscopes. That way we would be able to see simultaneously the real picture of the brain and the hyper-spectral image of the injury.”

But it doesn’t stop there, said Gustavo Marrero Callicó. “The next step is to use this technique in other tumours, in the lungs, breast or the colon. We dream of launching a brand new specialism that we could call hyper-spectral medicine”.

Do you know: what colours do animals see?