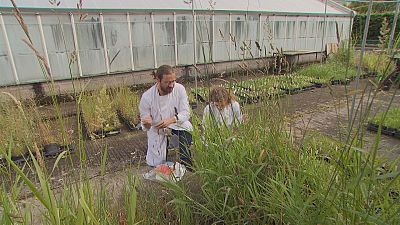 The grassy banks of the river Barrow in Ireland may look unproductive in agricultural terms, but to scientists involved in a European research project the land and its vegetation may hold the key to an energy revolution.

The plant giving rise to such optimism is called myscanthus, a non-native species.

John Finnan, a crop researcher at Teagasc Oak Park explained why it is a good candidate a an energy crop: “Not only does it produce high biomass yields but it has mechanisms which mean that it is quite thrifty in the way it uses both nutrients and water. So it produces a high yield of biomass or energy from a low input from energy.

“Crops like myscanthus grow quite well on some marginal sides. In fact they grow so well that they grow better and produce higher yields than corresponding yields on good agricultural soils”.

Myscanthus is mainly native to Asia and Africa and its cultivation in Europe faces a number of climatic challenges..

“The cold conditions during spring and autumn, especially here in the northern parts of Europe can limit photosynthesis,” said Manfred Klaas, a plant molecular biologist involved in the research. “That’s why we’re trying to find new genotypes, which can better photosynthesize under such conditions.”

Liquid nitrogen is also key to this quest for maximum energy-efficient grass. Scientists use it to study the genetic secrets of different grass varieties and to identify the ones best adapted to extreme weather, for example flooding or drought.

Biotechnologist Thibauld Michel explained how the transformation process works: “We grind the plants. Then we extract the DNA using chloroform. So, on the one hand we’ll have all the plant’s tissues and proteins and on the other hand the DNA molecules. Then we treat these molecules to read the DNA code, the small letters that compose that DNA. That will help us select the plants we’re interested in”.

The ultimate aim, the scientists say, is to come up with clear cropping patterns that can help European growers bring these grasses to the energy market, particularly for heating systems.

“We’ve also optimized the cultivation methods of the biomass-grass in terms of practical agriculture,” said Susanne Barth, coordinator of Teagasc Oak Park/GrassMargins project. “And we have developed a method of drying this biomass-grass more efficiently. This had been a big problem in the production line.”

And while trying to transform these grasses into a viable energy solution, researchers also point out at a potential added value they think they have; these marginal species absorb huge quantities of CO2 and could help fight climate change, according to Prof. Michael Jones of Trinity College Dublin’s Botany and Plant Physiology department: “One of the things that is happening when these plants are growing is that they are building up the store of carbon in the soil. This is a way of sequestering carbon that is coming from the atmosphere”

Do you know: can grass save the planet?