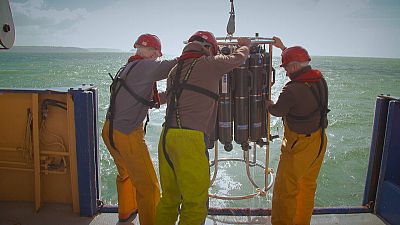 Plymouth is one of England’s historic port cities, a place from which sailors, soldiers and scientists have set off to sea for centuries. Today there’s a new twist to the tale though, as oceanographers now have a huge fleet of satellites in space to add to their list of high quality data sources in order to study and understand our seas.

Among those on board the Plymouth Quest research vessel as we head out into the English Channel is Spanish scientist Victor Martinez Vicente from Plymouth Marine Laboratory, a specialist in combining data from satellites with data from the sea surface. He takes water samples from a device called a rosette, which plunges off the back of their ship into the Channel waters to take samples at different depths.

His colleague, James Fishwick, a bio-optical oceanographer at PML, explains: “It’s a joined up approach, so we use the in situ sampling to get a true idea of what’s going on in the environment, to measure the interactions between all the different parameters – chemical, physical and biological – we then bring them and we can relate them to what the satellites has seen.”

Today’s samples will be studied for colour, because colour tells the researchers about phytoplankton, microscopic algae that are the base of the ocean food chain, and produce half the oxygen on planet Earth. Victor’s results will then be used to improve the accuracy of satellite data.

“So in this little vial you get in the order of thousands of small cells – phytoplankton, which do photosynthesis, as well as bacteria, and other particles as well. You can detect this using laboratory measurements that count each of the current cells in it. One of the reasons why we’re doing this is to match what the satellite sees with what there is in the water,” says Victor.

The field of satellite ocean observation is due to get a boost later this year as ESA’s Sentinel-3 will join the fleet of Earth observers already in orbit. It’s part of Europe’s Copernicus programme, and heralds a new era in ocean observation by offering an uninterrupted flow of data from its speedy polar orbit, now and well into the future.

Jérôme Benveniste, Senior Advisor in Altimetry at ESA, explains how the satellite age has revolutionised oceanography: “When you go across an ocean from north pole to south pole with a satellite it takes 50 minutes, and 50 minutes to complete the circle. Given that it does 14 orbits a day, you have global coverage in practically one day. You’d need almost one year to do that in a boat.”

We have long known that oceans dominate life on our planet and govern our weather and climate. But now, with the eyes of satellites, we can really get a planet-scale view of what’s happening:

“From space we measure physical parameters, like temperature, salinity, we know how to measure mass by the variation in the gravity field, and we measure the height of the ocean, which includes several phenomena, and we also study colour in visible light,” says Benveniste.

A lot can be learnt from space, but there’s always a need to keep checking the data with readings from the open sea. Among the instruments on board the Plymouth Quest is a new device to automatically control for glinting sunlight, developed at PML by Victor and colleagues: “It’s an above water radiometer – it looks at the ocean colour, directly as a satellite would, but in this case the measure is taken right above the surface of the water. We measure that so that we are able to give a better validation of what the satellite is actually looking at.”

That one single parameter, ocean colour, can reveal so much about our planet. In particular it shows how the living ocean adapts to change.

Senior Scientist at PML, Shubha Sathyendranath, Senior Scientist, explains: “Phytoplankton are microscopic, they are dynamic, they are very active, so you can think of them as the ocean analogue to the canary in the coal mine. They will respond very, very rapidly to any change.”

The satellite revolution in oceanography means each parameter can be monitored, mapped, and modeled on a global scale. So researchers can begin to look for trends and signs of interaction between ocean colour, sea level surface height, and temperature.

Sathyendranath highlights some of the changes they’ve seen via satellite: “Sea level has been increasing, not everywhere, and not uniformly, but overall the trend is an increasing trend. Ocean temperatures have been increasing, surface temperatures, but not so much in the last couple of years, and the scientists are again interested in why that is so”

With so much more data now available, from many different sources in the sea and in space, we’re slowly but surely starting to get the measure of our oceans, according to James Fishwick:
“We’re in a period now where the information that we’re getting back from the oceans is so significant – we have the satellite remote sensing, we have observatories and in situ monitoring, we have large autonomous systems out in the ocean all the time. We know far more than we ever have done because of technology. Once we understand that we can then start looking into the future to see how things might change, how the environment might adapt to a changing environment.”

The Astronaut Academy: "We focus on leg muscles and back muscles"