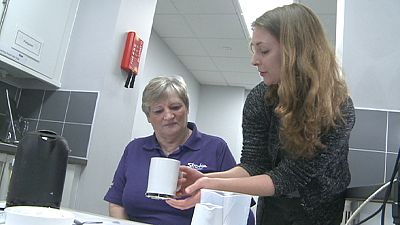 Helping stroke survivors improve their quality of life is the goal of a groundbreaking research project at the University of Birmingham in England. Scientists are working to minimize the consequences of what can be a devastating event.

Rita, a stroke survivor who is also a volunteer in the project spoke of her determination to lead as normal a life as possible: “I was in a wheelchair for about four or five months and then I had some rehab. And then I got on to a zimmer frame, and then a stick. And after that, after the physiotherapists put me on the stick, I was away… nothing was going to stop me… nothing.”

“My stroke has only affected me physically,” said Stephen, another research volunteer. “My brain is as quick as ever. I’ve always had a quick thinking brain. And it still is very quick. But I can’t always get it out in time”.

A common post-stroke problem is the inability of the survivor to perform ordered sequences of movements. An impairment that is hard to diagnose, but one that significantly affects the patient’s ability to live an independent life in their own homes.

“Their typical impairments are to do with making errors in sequences, said Gary Randall, a cognitive scientist with the UK’s Stroke Association. “Or they will do things in the wrong order. So this patient for instance has a tea-bag. And he immediately puts the tea-bag into the sugar bowl. So he completely ignores the mug that he is supposed to use. And then you see that he takes another tea-bag… and repeats the error”.

Scientists involved in the EU-backed research project are testing a personalized home rehabilitation system for patients with these symptoms. They have designed intelligent household objects connected to a display that signals errors and instructs patients how to correct them, guiding them through simple tasks like making tea.

“The trials have shown that we can enable people to make less errors and to become quicker in performing the tasks,” said Randall.

The complex electronics were partially designed and assembled at the University of Birmingham.
The intelligent objects have sophisticated sensors able to autonomously monitor orientation, motion and grip strength. That information is then wirelessly sent back to a central device.

Martin Russell, a computer scientist working on the hi-tech system demonstrated how it works in the simple process of making a cup of tea: “When I lift the jug up, the sensors are not longer pressing on the table, so it is obvious that the jug has been lifted.

Along with stroke survivors, the technology could also offer enhanced rehabilitation to patients with suffering Alzheimer’s disease or traumatic brain injures.

Researchers say it could become a market reality in less than a decade and be integrated into existing occupational therapy.
However, Alan Wing, a psychologist and coordinator of the Cogwatch project said it would never replace the human touch:
“The therapist does not usually go to the home. But this system can go to the home. The patient can practise in their home. And the therapists can observe and monitor what the patient is doing at home. So we think it will help the therapists. But it will never replace them”.

But it has given a little more hope to stroke victims like Rita: “You just have to get out and do what you can do,” she said. “It is not what you can’t do. It is what you can do that matters. And if you can’t today, then try again tomorrow”.

Do you know: how smart is a coaster?