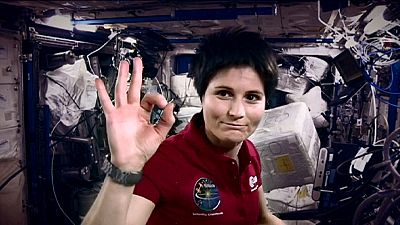 Astronauts do way more than just float around in microgravity, stare out the window of their spacecraft and tweet silly pictures: play is what they do in their spare time, the rest is work. Real work on scientific missions that are often highly technical and time-sensitive.

Italian astronaut Samantha Cristoforetti told Euronews about the latest experiment she worked on as an astronaut on a mission to the International Space Station.

The T-Cell experiment aims to study how deficiencies in the human immune system are affected by a microgravity – or weightless – environment, Cristoforetti explained.

The study uses samples of isolated human T-cells loaded into special experiment containers and transported to the space station aboard the SpaceX-3 Dragon spacecraft.

“Those cells had to be taken out of Dragon immediately because they were in cold storage and they would degrade. And so we had a very strict timeline and we were able to perform it successfully,” said Cristoforetti.

The experiment looks into the genetic and molecular mechanisms that underlie diminished T-cell activation – in other words, a weakening immune system – which occurs both in elderly people and astronauts.

“You just happen to find out things that happen in space that you did not know about and that’s even more exciting because it opens up new questions and new possibilities of discovery.”

Samantha launched to the ISS on November 23, 2014 on a six month mission. She is a captain in the Italian Air Force and has logged over 500 hours flying six different types of military aircraft. Born in Milan, Italy in 1977, Samantha spent a year as an exchange student in the US before studying for a Master’s degree in mechanical engineering at the Technische Universität Munich in Germany. She enjoys hiking, scuba diving, and yoga.
Next Series