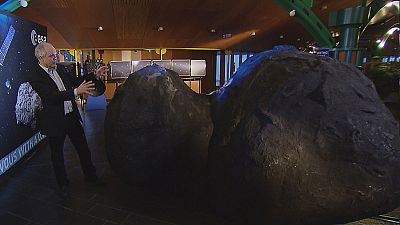 In 2004, Rosetta the spacecraft and Philae the robot set out on a mission to catch a distant comet called 67P/Churyumov-Gerasimenko.

What they are now doing over a decade later is re-writing, in surprising new ways, our understanding of how the solar system formed.

Last November, after spending years chasing the comet, Rosetta finally dropped Philae onto its surface to study it more closely.

It was the first time a man-made object landed on a comet. Comets are of huge interest to scientists because, to human knowledge, they are the most ancient bodies of the solar system – the building blocks from which our sun and planets were formed some 5 billion years ago.

The Rosetta mission has been full of surprises – from the odd shape of comet 67P Philae’s unintended bounce towards a location where it could not easily recharge its solar-powered batteries.

The tired little lander went to sleep in November and scientists have since been struggling to determine its exact location.

Philae has not been returning calls lately, but the Rosetta team is hopeful it could make a comeback by summer,== as the comet moves closer to the sun and the robot can finally gather more energy.

For the time being, Rosetta and its team are keeping an eye out for their baby – listening out on a regular basis for any signals Philae might send, while also scanning the comet’s surface to see if they can spot the lost robot.

Work on the Rosetta project has been going on all over Europe. The mission’s most surprising discovery so far was made by scientists in Bern, Switzerland.

“We have seen early on in the mission that the water that we have up there is completely different from the water that we measure here in the laboratory,” said Kathrin Altwegg, Professor of Physics at the University of Bern.

“This is a very good proof that the comet has other water than we have here on Earth,” she said.

A previous measurement from another similar type of comet had found that its water was just like that on Earth. So the quite different result from Rosetta’s Rosina instrument made a big wave in the science community.

“That’s a real surprise. That sends us back to the drawing board in terms of trying to figure out how did Earth get all of its water, if not from material coming from deeper in the solar system,” says Claudia Alexander, Project Scientist at NASA, which has been contributing to the Rosetta mission.

There have been more surprises: the comet surface has what look like cracks, boulders, mountains, craters and ripples, but are really alien features – like nothing mankind has ever seen before.

“If I felt it with my fingers of course of course it would feel very very cold. But besides that, and that’s partly surprising, it’s hard material,” says Stephan Ulamec, lander project manager at the DLR German Aerospace Centre.

“It looks a little bit like rock. It is not rock, it is some icy material with dust, with organic compounds, but it’s hard, porous material.”

And what makes scientists’ work even more fascinating is that the comet is constantly changing.

“You have to imagine that the comet undergoes a huge amount of thermal stress,” says Nicolas Thomas, Professor of Experimental Physics at the University of Bern.

“It gets heated during the day up to maybe 50 degrees centigrade, and then during the night it cools like crazy down to minus 200, and possibly below. This generates cracking on the surface, and breaking the surface apart through thermal fatigue.”

These are exciting times for the Rosetta science team as the spacecraft flies alongside the comet each day, capturing images, dust and gas along the way.

The team is also getting ready in case Philae shows signs of life, because it could bring even more scientific breakthroughs.

However, Philae would need to be closer to the sun to warm up and recharge its battery enough to do more sophisticated scientific work, like drilling into the comet’s ground. Last November the drill failed to reach the surface, but that could change.

“The images that we took show that if we slightly turn Philae on its feet, then the drill will have access to these materials – which the images show to be the most fabulous we could imagine, because in these materials there are all these original blocks of ice filled with organic molecules within our grasp,” says Jean-Pierre Bibring, Lead Philae Scientist at the Institut d’Astrophysique Spatiale in Orsay, France.

For now, Rosetta is keeping scores of scientists busy seven days a week, as it provides them with daily data that they need to study closely before they decide what to do next.

“Now we’re in the middle of the science, we’re in the do or die, in a way,” says Matt Taylor, Rosetta Project Scientist at the European Space Agency.

“Basically there are things happening now that if we decide on a certain operational procedure or a certain observation, we will lose the opportunity to ever make that measurement again, because of the evolution – we’re only here once.”