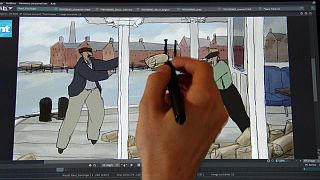 At an animation studio in Prague
researchers have made a breakthrough in updating classic, black & white hand-drawn cartoons to make them appeal to a generation of viewers brought up on a diet of 3D computer animation. They believe it will herald a new era in cartoon animation.

In animation, everything takes a lot of time. But with programmes like this we'll be able to go much, much faster; that's certain. We'll be able to have a bit more fun

A new era in animation
The hope is based on software designed to automate the time-consuming painting of hand-drawn animations. The technology was developed for a range of drawing styles, as Daniel Sykora, a computer scientist at the Czech Technical University in Prague and coordinator of the Cartoon Scientist project explains:

“We had to develop some new algorithms to find the proper boundaries of the (drawing) regions, so that the user just has to provide some indications about where those regions are and the algorithms find these boundaries automatically”

Scientists at this EU-supported research project realised that the same software could be used not only to restore old animations, but also to boost the technical and artistic possibilities of 2D animation-making.

“You can for instance create some 3D approximations on the hand-drawn image, which was something that was almost impossible or very tedious before. Or you can, for instance, assign some more visually rich and tactile information into the drawing and you can combine all this together to produce images that look like 3D animations, but which are still just 2D.”

Range of artistic styles
The software was designed to be flexible, so it can be used for painting in various drawing styles. It allows for precision drawing, but with less manual effort from by the artists.

“As far as I understand, I will also be able to use animation on paper in my film hand-drawn films,” says Zuzana Studená, an animator witt Anifilm . “This is a lovely technique that I really like, and up to now it’s something I’ve missed out on with existing graphics tablets”.

“In animation, everything takes a lot of time. But with programmes like this we’ll be able to go much, much faster; that’s certain. We’ll be able to have a bit more fun”.

Boost for European animation
The software has just been marketed as a commercial plug-in in an existing graphic design programme. Experts hope it will be a first step towards making the European animation film industry more competitive. .

“We’re now able to colour whole sequences, dozens and dozens of pictures with just one stroke of the brush – something we were not always able to do before, says Fabrice Debarge, a product manager with TVPaint, which also using the new software.

“It’s a very important change in our work flow. The new programme also helps reduce the cost of animation making. Colouring is very slow, it is often outsourced outside Europe. So any chance we may have to retain those activities here in Europe is welcome; we’ll save time. The fast colouring of animation is a real challenge.”

Do you know: is there a future for 2D animation?