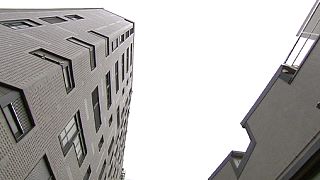 In the Italian city of Milan a major European research project is examining the energy efficiency of new insulation materials. It aims to assess the advantages and disadvantages of these materials, and establish how and where can they be used.

“It’s time to innovate new systems, to retrofit these buildings with energy efficiency in mind,” he added.

The researchers have developed new insulation materials to make old buildings more energy efficient, in terms of their facades, wall cavities and interiors.

Karim Ghazi Wakili, a physicist with EMPA Research Institute, showed euronews three prototypes: “[The first} is insulation material made mainly out of three layers of polyester fibers. They are supposed to have the highest thermal insulation.

“The next material has only one layer of polyester fibers. And it has two textiles on both sides.

“And the third material is the cheapest one. It is made out of a material called ‘perlite’. It is thicker because perlite has higher thermal conductivity.”

Researchers have tested these materials in a building of the Politecnico de Milano University in Italy. It was built in 1965.

The inner walls of one room were covered with sensors and fitted with the three prototypes of insulation materials.

“The sensors measure temperature, humidity and heat flow at three different places; outside the building – that’s why we have sensors installed on the facade – in the cavity walls, and finally on the inner surface of the walls,” explained Gabriele Masera, a building engineer at Politecnico di Milano University.

“Outside sensors also measure radiation and wind speed. This way we are able to see how much heat leaks from the different materials in building. All the data will help us build a mathematical model that will allow us to understand how each material reacts to different climatic conditions.”

Magnetti Building in Milan, which makes re-fabricated kits for retrofitting exterior facades, is the kind of company the research is aime at.

Insulation materials developed by researchers will be included in some of its kits, which can be customised.

Director of Operations Marco Predo believes the market is ready for such solutions, provided they come at a competitive price: “In recent years, we’ve seen data that seems to prove that the market for retrofitting facades and existing buildings is indeed on the rise. So we’re quite optimistic indeed about the market prospects for these new insulation materials”.

Researchers hope their new insulation solutions could become an affordable market reality in around four or five years.