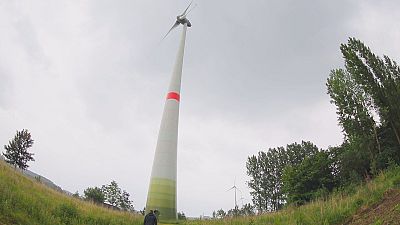 In this edition of Business Planet we see how the European Network of Renewable Energy Source Cooperatives – known as REScoop – is making it easier to meet the EU’s target of 20 percent of the region’s energy being from renewables by 2020.

Reporter Serge Rombi is in Belgium to check out a whole new generation of cooperatives, intended to speed up the process of energy transition.

EcoPower is a Belgian cooperative using wind power, bio-gas and solar energy. It is also one of the founders of REScoop, the European Network of Renewable Energy Source Cooperatives.

EcoPower’s electricity – which is sold at cost price – accounts for 1.5 percent of the market in the Flanders region. Set up in 1991, the cooperative now employs 25 people full time.

Dirk Vansintjan is a member of Ecopower’s board and REScoop’s president. He told euronews: “EcoPower started small, around a kitchen table, with a few people. But, now we represent 50,000 members. We have equity of 50 million euros and [annual] turnover of more than 25 million euros.”

Dirk Vansintjan explained the advantages of that: “One wind turbine costs three million euros. You can easily see this cost is a problem for a small group. That is why bigger energy cooperatives help out those that are just starting out by offering them a bank guarantee or loans.”

The emergence of such organisations, using new business models, is a good demonstration of how the so-called social economy works.

Cooperatives that produce and supply renewable energy focus on mutual aid and solidarity, but also make sure that contracts are awarded fairly.

Their profits are reinvested, or redistributed in the form of dividends or as discounts or rebates.

Benjamin Huybrechts, a social economy expert at the HEC Management School, University of Liege, says that influences vital decisions: “For example, if a farmer offers his fields for a wind turbine company, a neighbouring farmer can’t do the same because turbines are not allowed to be too close together. So only the first farmer would receive money. Whereas in a cooperative system, a decision can be taken collectively, and profits reinvested in the community, so everybody living there benefits.”

The European Network of Renewable Energy Source Cooperatives has also introduced measures to assist and support the creation of new cooperatives.

Benjamin Huybrechts believes that is important: “Through the system of mentors, the sharing of best practices as wall as guiding and supporting new initiatives, we can see the industry is becoming more professional, thanks to the federation.”

A final thought from REScoop’s Dirk Vansintjan: “For me, the key to success for renewable energy cooperatives lies in their ability to gather a group of competent citizens that are able to manage the technical, financial and social aspect of the cooperative.”