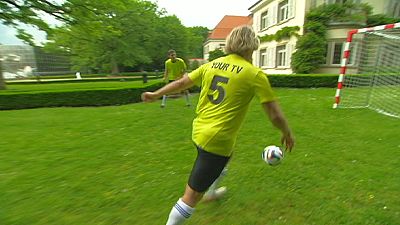 The World Cup is upon us and all around the planet we will be using space technology to watch the action live from Brazil. Thousands of fans may enjoy the football in person, but it’s estimated that over 3.2 billion of us will catch some of the live TV coverage – that’s almost half the population of planet Earth.

Xavier Lobao, Head of Future Telecommunications Projects at ESA stressed the role of space in watching the games: “No matter what the technology that is used at the homes to receive the television, satellites are being used.”

The World Cup is broadcast under what satellite operators call ‘occasional use’ transmission. That’s the name for bandwidth allocated alongside regular broadcasting in order to cover special live events. This month is a busy time.

“The World Cup dominates all occasional use space in a country like Brazil. With good planning we’re able to augment the capacity, maybe two years in advance, by relocating another satellite where possible, but in reality there is only a limited amount, and pretty much all the capacity will be used on the day.“explains Richard Lamb, Head of Occasional Use Operations at SES

The fact that some of the stadiums are in more remote areas of Brazil just increases demand for satellite technology. “Brazil is a little different from previous events again, simply because the connectivity between the stadiums, the fibre infrastructure, there isn’t enough of it as the broadcasters need, so satellite is taking a much bigger part for that,” Lamb told Euronews.

Satellite television may be over 50 years old, but it remains a remarkable feat of engineering to be able to distribute a high quality picture of a live event around the world almost instantaneously. “You can imagine that after the goal is scored in Rio, people living in the north of Siberia will see that goal about about a second to a second and a half later,” said Martin Halliwell, Chief Technology Officer at SES

Building, launching and operating telecoms satellites is a very competitive business. Some of the biggest players are European: Eutelsat operates 37 satellites, and SES has a fleet of 55. Hispasat's Amazonas 1 satellite is a key link in this World Cup’s broadcast chain.

Meanwhile, the European Space Agency helps industry develop new technology. “We are working on lighter satellites, more efficient satellites, that allow for more equipment, more antennas, larger antennas to be used. So that basically with the same equipment on the homes, as a minimum the antennas, changing just a set top box maybe, we are able to receive richer content, more content,” says ESA’s Lobao.

He is looking forward to growth in quality and quantity in terms of how large sporting events are covered using satellite technology. “I think that with the advances in wearable technology in the future also the football players will wear cameras. And I can choose in that case to see a striker, and see the view from the striker when he is attacking. Or if there is a penalty or a free kick, I can see the view from the goalkeeper,” he says.