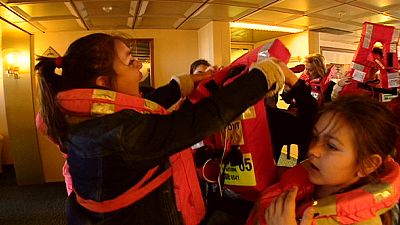 Ship evacuations sometimes turn chaotic, ending in tragedy. In this episode of Futuris, we look at why this happens and what can be improved with new technologies.

To date, a paper plan of the decks has been the captain’s main reference in an emergency. But it doesn’t show where the passengers and crew are located at any given time. If some areas are inaccessible, there may be no way of knowing if there are people trapped inside the ship.

A range of technological solutions is being developed, aimed at making ship evacuations faster and more organised.

Engineers from several countries have joined forces on this European research project. Tasos Kounoudes is an electronics engineer and the CEO at SignalGeneriX.

He and the LYNCEUS project team he manages are working on a new, faster way of locating a ship’s passengers and crew during a voyage.

“We have developed innovative wireless tags, which can be embedded into life jackets, so the location of people within the ship can be easily pinpointed,” he explained. “This will provide safety officers with the exact location of every passenger and crew member during an evacuation.”

To make this possible, researchers have replaced ordinary smoke detectors with a newly-developed version. These new smoke detectors also create a wireless network across the whole ship.

The latest technology also enables the real-time tracking of the tags on the life jackets. The current location of each person on board is transmitted to the captain, so decisions can be taken much faster.

“This interface is similar to the paper plan, so it can be used without much new training,” he said. “The difference is that with the electronic version you can actually see where everyone is. You can zoom in on different decks and see how many people are there. It’s much more functional than the paper and pencil version.”

Rather than searching through printed lists of passenger names, the crew can identify and count each evacuated person using a convenient hand-held device. The same smart tag can be worn as a bracelet, so the person can be found even if there’s no emergency.

But that’s not its only function, as marine engineer and president of the Maritime Institute of Eastern Mediterranean, Zacharias Siokouros, illustrates.

“The bracelet has the extra feature of being able to monitor the health condition of the person wearing it, if needed,” he explained. “So it’s ideal for people with health problems who may choose to be monitored. It’s also convenient for parents who want to track their children’s location on board the ship.”

But how could the crew find someone who has fallen overboard and is therefore no longer within the ship’s wireless network?

Many shipwreck victims die from hypothermia before they are found.

But researchers have developed devices that reflect radar signals, meaning the location of every victim in the area can be triangulated.

“If there’s a passenger in the water, this device sends an electronic signal to a similar gadget on the passenger’s life vest and will receive a reply,” he said. “The speed of this radio exchange indicates how far away that passenger is.”

The new, compact and low-power wireless devices can make emergency operations in the sea faster and better organised; preventing panic and saving lives.

How to find someone lost at sea?