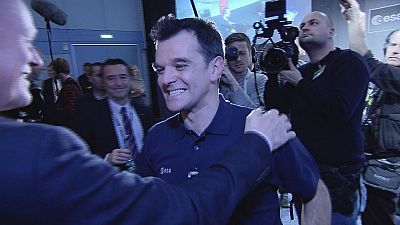 The exploits of comet-hunting spacecraft Rosetta are generating intense interest as it speeds towards a dramatic climax this autumn.

The craft will catch up with comet 67p/Churyumov–Gerasimenko, fly alongside, and put a lander on its surface. Throughout this fantastic voyage, Euronews will have special access to the engineers and scientists who are making it happen.

On 20th January Rosetta woke up from two and a half years of hibernation. It was a moment of extreme tension for everyone at ESA’s European Space Operations Centre in Darmstadt, Germany. Strained, nervous faces searched for a signal from a probe in deep space.

After some 45 minutes of anxiety the all-important first signal came through. The scientists burst into energetic applause.

ESA’s Spacecraft Operations Manager, Andrea Accomazzo, expressed the emotions of those around him: “Getting it back is incredible, now we have one of the most fantastic adventures, one of the most challenging space missions ever.”

So what is going to happen? Matt Taylor, Rosetta Project Scientist, explains: “The comet will approach the Sun, at its closest approach in summer of 2015, and that’s where we’ll see the most activity of the comet. One of the main questions that we want to answer with Rosetta is to observe this evolution from an inert object when it’s out beyond the orbit of Jupiter to some highly dynamic and volatile object as it passes in this closest approach to the Sun.”

Armelle Hubault, a Spacecraft Operations Engineer, spoke of the communications challenges in such a mission: “At the moment we’re using a very low bitrate, so basically it takes a long time to talk to the spacecraft, we have to talk to it very very slowly, so one of our first activities actually is to change the mode of communication so that we can start talking much faster.”

The are still difficult stages ahead, stressed Paolo Ferri, Head of Mission Operations: “We will switch on all units on board, we will test them, we will later in springtime switch on the scientific instruments, verify them. And this will bring us to the detection of the comet, we want the cameras on board the spacecraft to see the comet so that then we can manoeuvre the trajectory of the spacecraft to the right direction.”

For Project Scientist Matt Taylor the mission is much more than a game of tag with a celestial body:
“It’s not just about learning about the comet, by doing that we have this connection to how the solar system was formed, how the comet evolved within the early solar system, we can link that to the planetary formation and their early evolution, because the comets were there right at the formation of the solar system, and they were flung out into the deep freeze, storing this information, this primordial mix of material, and that gives us a clue to in fact ultimately where we come from as well.”