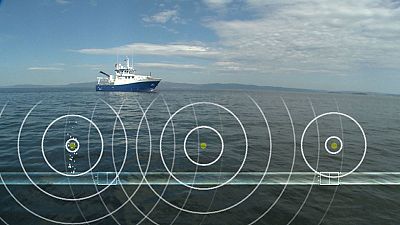 In western Norway, scientists are testing autonomous devices that can detect and understand what is happening underwater.

Kyle Zhang, who is a researcher in wireless communication systems at the University of Twente in The Netherlands, explains what goes into each sensors:

“Inside the casing we have electronics for sensing, and also for processing – that means we can do some local processing, if we want to detect a ship or a leakage of oil pipe. We can just do everything here, and it will send the signal to the control centre, the central station”.

Gas bubbles may be a symptom of a failing pipeline. A sensor node recognises the sound of bubbles and alerts the engineers to a possible leak.

But would it work on a large scale, deep in the oceans?

A European research project aims to build a functioning network for acoustic surveillance.

Paul Havinga is CLAM co-ordinator, and Professor of computer science also at the University of Twente. He explains how the new sensors work:-
“We position underwater sensor devices – they go deep under the water and they monitor the environment, and if they see anything which is wrong they will communicate with each other, and then send an alarm if needed to the shore”.

A number of specially developed sensor nodes are placed hundreds of metres down on the sea bed, at a distance from each other.

Each unit is completely autonomous, they have an inbuilt battery, so there is no need for a power cable. This means deployment is far cheaper.

The nodes ‘talk’ to each other using acoustic signals.

In the control room on board the ship, computer engineers can monitor how fast a message is going along the network of nodes.

Computer scientist Roberto Petroccia, from the University of Rome points out this is what makes CLAM different:-
“That’s the important concept of this network: you don’t just do point to point communication between two devices – instead, all devices in the network cooperate to accomplish challenging tasks”.

Once an underwater sensor detects a leak, it transmits the coordinates using sound waves.

Other nodes receive and then retransmit the signal – so passing it along the chain of beacons.

To access the network from the surface, researchers use floating communication buoys that convert acoustic messages into radio signals.

In the future, acoustic networks could be used for many tasks such as underwater navigation, tracking sea animals, or protecting oil pipelines and drilling platforms from accidents.

Paul Havinga again:-
“The system can potentially make the world much safer, environmentally friendlier, so we can detect any event – for example, the BP oil spill some time ago could have been prevented.”

Research will continue to improve the reliability and efficiency of the underwater surveillance system.