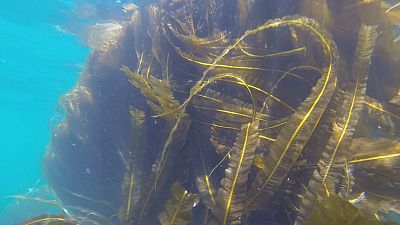 It’s a bright sunny day off the south-west coast of Ireland.

A team of local marine researchers have taken their boat out to check on their seaweed farm.

The algae they planted just a few months ago has already grown into an impressive underwater plantation.

“You can see quite clearly – there’s quite a large crop of seaweed down here. The plants are somewhere between two and three meters long, so at this stage we’re very close to harvesting,” says marine biologist Freddie O’Mahony.

Seaweed farming is a growing business in Ireland. Demand for seaweed is increasing in sectors like healthcare and food.

The team is working on Mabfuel, an innovative European research project to study algae as a potential biofuel crop.

Some species of algae contain sugars that can be used to produce bioethanol. Others are rich in oil that can be converted into biodiesel. Researchers are trying to make such fuels commercially viable by improving the algae growth and oil content. Along with seaweed, they’re also studying micro-algae – a species that grows and accumulates oil quickly when cultivated in bioreactors.

“It would produce between 7 and 31 times more oil than the best terrestrial crop. That’s what all the studies have shown. OK, there’s a lot more to do, but you know, ten years ago people would have laughed at you if you had proposed to put seaweed-based oil in your car,” says Julie Maguire.

The biggest challenge is extracting the oil trapped in the seaweed and micro-algae cells. Researchers treat the algae powder with large amounts of solvents to increase the release of oil, but this method isn’t efficient on a large scale.

“Growing the algae is obviously the easy part – whether it’s macro-algae or micro-algae that you’re culturing, it’s quite simple to grow. The hard part is extracting the oil from the actual algea. We need to look at the cheapest way to do it, using the least amount of resources,” says micro-algae researcher Fiona Moejes.

A cheaper oil made of seaweed could revolutionise the emerging biofuel industry.

Green Biofuels Ireland produces 30.000 tonnes of biofuel each year by recycling used cooking oil, animal fats and other kinds of fats. The biofuel is blended with mineral diesel, making it more environmentally-friendly. Researchers are testing algae oil samples with industrial grade tools. For biofuel manufacturers, developing a new product at a competitive price would help them expand production.

“Of course, our industry is always interested in this new oil. Because we can convert any type of oil in this process to make biodiesel. And the greener it is, the better it is for ourselves,” says Joe Jewison, laboratory manager at Green Biofuels Ireland.

Algae grows almost anywhere, as long as it gets enough sunlight, water and carbon dioxide. It improves air quality by absorbing CO2 and reduces the negative effects of fish farming by filtering out excess nutrients that pollute waters in fisheries.

“The only environmental impact you have on seaweed farm is beneficial. It’s all positive. There’s nothing negative about a seaweed farm. I’m not saying that they will clean up the sea completely, but they do help to clean up the excess nutrients in the sea. So I like to see the seaweed as a sort of a mop. A nutrient mop,” says Freddie O’Mahony.

“I’m chewing it. It’s quite tasty. Would you like to try some?”, she adds with a smile.