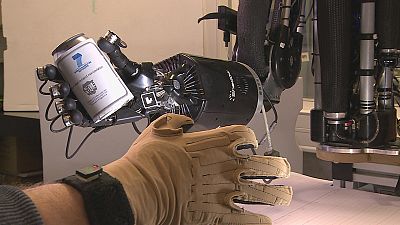 The human hand, a masterpiece of evolution, has for a long time been impossible to recreate artificially. Its complex mechanics and high sensitivity have challenged the best masters of robotics. Now, as if straight from science fiction, a robotic hand is a reality.

A more intelligent robotic hand is the goal of a European Union research project that has just presented its results at Pierre and Marie Curie University in Paris. Researchers from six EU countries joined forces to make a hand that looks, reacts and behaves like the real thing.

“It’s a real challenge to create an artificial hand, because one must recreate our hand movements that are already quite complicated,”
says Robotics Professor Véronique Perdereau, co-ordinator of the UPCM/HANDLE project.

Humans naturally adapt their grasp, placing fingers correctly to manipulate various objects. For robots, it is a much tougher task. Learning from the human hand, scientists made a large database of various grips and movements that the robot uses to get the required results.

“The hand needs to be equipped with various sensors to collect as much information as possible about what happens when the hand approaches the object, when it picks up the object, and while it’s manipulating the object – and its movements need to be reproduced with high dexterity, resembling our natural actions, which is extremely difficult,” says Perdereau.

Using video cameras, the robot studies its surroundings before planning its movements. From its database, it chooses the right actions to complete the task successfully.

“It uses a colour camera that collects distance data to detect the required object and any possible obstacles. Based on the shape of the object, it can determine how to seize it avoiding any collisions, and thanks to fingertip sensors, it can be sure that the grasp it has chosen is correct,” says research engineer Guillaume Walck.

As proof of its dexterity, the robotic hand can rotate the object it has lifted from a surface: a soda can can be picked up with just two fingers, and then the hand modifies its grasp to hold it with three fingers while pouring the drink.

The pressure feedback from the fingers is particularly important when dealing with delicate objects.

“This hand has multiple degrees of freedom that allow it to address very fine and complex manipulation tasks, giving it enough dexterity to manipulate extremely fragile objects, such as lightbulbs,” says robotics researcher at the CEA Mathieu Grossard.

Scientists believe that human-like robots can integrate more easily into our human-designed world, using the same objects we normally use. In many situations, they can give a helping hand to make our work and lives safer and more enjoyable.

“If we manage to imitate human dexterity, then we can imagine robots that will be capable to work alone in dangerous environments, such as nuclear objects or space. And much closer to home, we could have robotic assistants able to help elderly or disabled people, who may need such support and some company,” suggests Perdereau.

That is the goal that will be brought closer by several follow-up research projects.