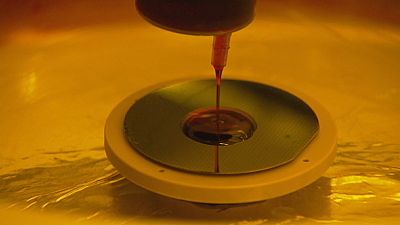 Like water from a faulty tap, power leaks from all electronic devices – whether in use or not. The fact is a portion of our energy bill goes down the drain because the existing microchips are not very efficient.

As we find out in this programme, the electronics of tomorrow will use much less power. But first, let’s see if we can already cut that energy bill with smarter air conditioning.

At the Centre for Sustainable Building in Kassel, the internal climate is controlled by an energy-saving computer algorithm. The system analyses weather patterns to determine when to turn the air conditioning on or off. It also saves energy by relying on natural ventilation and solar power, whenever possible.

Dimitrios Rovas, assistant professor of thermodynamics at the Technical University of Crete, explained: “Suppose that we have this building and there’s high wind, so we know that certain rooms will be cooled quicker because there are more losses to the outside. So our system is able to predict that particular room or particular zone will have more energy needs in the foreseeable future, and can start to optimise by pre-cooling, or pre-heating that particular room, using, if available, energy from the photovoltaics [solar panels].”

The system deals with each room individually using sensors that measure temperature, humidity, CO2 levels and the number of people present. It also reads work schedules, so it knows which rooms will be occupied and when. Based on that, it guarantees comfort with minimal energy cost.

This smart algorithm has been developed within a European-funded project bringing together researchers from five countries.

Juan Santiago, a senior researcher in renewable energies and technology integration, FIBP, told euronews: “What we do in this building is simulating hundreds different possibilities, based on tomorrow’s forecast of temperature and [solar] irradiation; and with that, we create a strategy for the building that will save energy and give more comfort to the users.”

The simulation software runs on a cloud network, leaving the local operations to simple devices.

Juan Santiago said: “What we have is a small computer that is able to manage all the building – it receives a signal from the cloud and sends it to the building, to make for example a blind go down.”

Users can interact with the system through a web interface on their wireless tablets or smartphones if they need to control something manually, or just to check sensor indications at any time.

Running similar algorithms on a larger scale, the energy research centre at Aachen University operates like a giant refrigerator. To keep the right temperature in its multifunctional offices, conference rooms and laboratories, it taps into the underground energy reserves.

Alex Michalski, a Phd student in geothermal energy at RWTH Aachen, said: “What we have here are 16 borehole heat exchangers, with a depth of 100 metres. We’re pumping warm water into the ground and we pump out cold water, with the gradient of four degrees Celsius.”

The geothermal field, solar panels and even excess heat from server rooms provide some useful energy for the indoors climate system. The computer software uses all available sources to optimise the temperature of water running through pipes in the ceilings.

Ana Constantin, a research assistant in heat replacement and simulations at RWTH Aachen, explained: “After the heat pump cools the water or heats it up, it distributes it around this whole building. And we do it by circulating it through the pipes in the concrete ceiling. And the software system tells the heat pump what temperature this water should have.”

Johannes Fuetterer, a research assistant in climate control strategies optimisation at RWTH Aachen told us: “The building will adapt to your habits – when you come home from work, when you leave for leisure time et cetera, – it will adapt the heating system to pre-heat, or pre-cool the building, saving energy and thus money for you, and raising your thermal comfort.”

Another European project tackles so-called energy vampires: all electronic devices, from mobile phones to supercomputers, leak power even in the sleep mode. In Europe alone, the loss of standby power amounts to the whole electricity consumption of Austria, Czech Republic and Portugal combined.

Kirsten Moselund, a nanoelectronics scientist with IBM Research in Zurich told euronews: “One of the issues we have is that transistors today – and transistors are the building block of all electronic circuits – are leaky devices. That means that even when they’re not functioning, they’re still leaking power; so a lot of power is actually lost without being used for anything. And we’re working on a new type of transistor called ‘tunnel effect’ that can hopefully remedy this problem. So that means they leak less power when they’re not being used, they consume less power, and we can reduce the power of electronic circuits made with this device compared to conventional devices.”

A transistor works like a water tap, enabling the flow of current. Theory predicts that next-generation tunnel effect transistors will require much less voltage for maximum efficiency. The challenge for the scientists today is to successfully combine silicon, silicon-germanium and semiconducting nanowires.

Mattias Borg, a material scientist at IBM Research in Zurich said: “We put this silicon wafer inside a reactor, and then we grow nanowires on a silicon wafer, and using this structure, the combination of these two materials, we can then make a new type of transistor which allows for low-power operation while still maintaining the same speed as modern transistors.”

The goal is to reduce the power consumption of computer chips by 90 percent, and virtually to zero in the stand-by mode.

With this efficiency, many devices will need charging at all – they will simply harvest all required energy from the environment. Thin and flexible self-powered devices can revolutionise fields like healthcare, security or communications.

The coordinator of the STEEPER project, Adrian Ionescu, said: “An interesting outcome of this is that combining ultra-low power electronics with flexible substrate technology and with an energy harvester, that can be integrated together, could result in a type of ‘autonomous system’ enabling a completely new type of application in smart objects used in everyday life – like a wearable system, like an object in our environment that can include a lot of functionalities that we can use in order to have a better life, better interaction with our environment.”

So far, as the research continues, it is still hard to tell when the next generation of transistors will be ready for industrial scale production – some scientists estimate it will take another 15-20 years to plug the energy leaks.