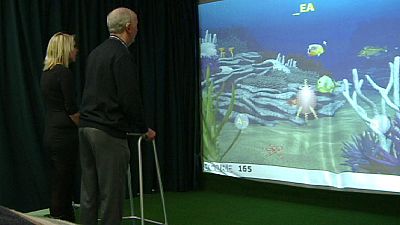 “I lost the swing in my left arm. It did not work very well. I realised something was wrong”.

“My problems started 11 years ago. So I went to the doctors, and they eventually diagnosed Parkinson’s disease. It was 2002”.

“Now I cannot work in the garden as often. At least not for as long as I used to. I really enjoyed electronics and used to solder small components. It is now impossible for me. I cannot do it any more”.

Those are the thoughts of three people who suffer from an incurable disease. In Europe there are around 75,000 new cases of it every year. All have volunteered to find new diagnosis and tools for rehabilitation. This is the story of how European patients and researchers have teamed up to fight Parkinson’s disease.

At a hospital in the Netherlands, an unusual experiment, involving a 68-year-old patient with Parkinson’s disease.

“I started suffering from pain in my lower back. But it took almost 3 years for doctors to identify my disease as Parkinson’s,” explains Harmien Floor-Schotten a Parkinson’s disease patient .

That late, difficult diagnosis motivated her and other volunteers – both Parkinson’s patients and healthy subjects – to take part in a pre-clinical trial aimed at testing a revolutionary pen.

It has been designed to help to identify the elusive early stages of the disease. Esther Smits, Movement scientist at the University Medical Centre Groningen explains: “We have to measure muscle activity so we can see what happens in muscles when volunteers are moving their arms to make the drawings.”

The writing patterns of both Parkinson’s patients and healthy subjects are compared. Those patterns, scientists say, can possibly help them to determine if a patient is suffering from Parkinson’s disease or from other less dramatic neurological disorders.

“We do find some clear differences between the healthy controls and the Parkinson’ s patients that we have measured. On the one hand, these differences are what we expected. So for instance, Parkinson’ s patients move slower in all tasks. But also some differences were a little less expected. For instance, in the writing tasks, we found that Parkinson’s patients write considerably smaller than healthy people, even if they are not complaining of writing smaller. So this in particular can be a sensitive tool for diagnosis,” points out Natasha Maurits, Clinical neuroengineer at the University Medical Centre Groningen.

The pen has been re-engineered by scientists under a European Union research project. The prototype has sensor technologies that help to understand the complex coordination processes used by the nervous system during the course of handwriting.

‘Then we built this pen system with these different sensors and data analysis techniques. We developed algorithms that would automatically analyse motion, the control behind that motion in the nervous systems of the users”.

The next steps of the pre-clinical trials will involve the comparison of writing patterns between patients with Parkinson’s and those suffering from tremors and other movement disorders.

“What I would hope is that we have got a tool that is easy to use, and that in 10 or 15 minutes gives you a profile of likely diagnosis. I don’t think we’ ll say with certainty that this is Parkinson’s disease, that is not possible. But it might be possible to say that this is a patient that better be seen by an experienced neurologist,” says Natasha Maurits, Clinical neuroengineer at the University Medical Centre Groningen.

Nico Leenders, Neurologist at the University Medical Centre Groningen adds: “We can make a distinction between Parkinson’s and other conditions, like essential tremor. Or we can assume, well, this is perhaps a movement problem, but it is more related to an elderly person, and it will not develop into a Parkinsonian symptom. Then, you can tell the person more safely what his or her future will be.”

Meanwhile, in Belfast, researchers are trying to develop new rehabilitation tools based on sensorial stimulation.

The first thing scientist had to understand was if and how Parkinson’s patients’ movements can improve when there is a sort of trigger in their environment.

Marta Bienkiewicz, Cognitive neuroscientist at Queen’s University Belfast explains: “We are trying to understand more what happens when there is additional sensory information in the environment that you can perceive by hearing or seeing. And why it improves the motor control, the movement in Parkinson’s disease patients.”

“I can see the benefit. My golf swing, to start with has much improved,” says William McDonald a Parkinson’s disease patient.

Cathy Craig is the coordinator of the Tempus_G project. “We are interested in understanding how the brain can use perceptual information to guide our actions. So for instance in the games that are being played, you see the falling apples. That is perceptual information that tells us what is happening. And that information guides the movements. The apples are falling at a certain speed, and the players have to control the movement of the basket so they actually catch the apples”.

Both patients and researchers see huge psychological and physical advantages in these easy, fun rehabilitation techniques.

“I find it fun. I find it enjoyable. I find it worth doing. During this trial, John and I have been coming together as volunteers. And we have this feeling of competing against each other. It does not matter who wins. It is just the fun of it, the companionship,” Jim Henry a Parkinson’s disease patient.

“I find the mobility is the big issue here. The objective is to be more mobile than what we normally are. I find it very useful,” says John Herron a Parkinson’s disease patient.

“From a physical point of view, the patient is essentially encouraged to move, particularly around the torso area. A lot of participants in the trial have commented that they feel much looser here, that they can rotate a lot better. And that rigidity in the body is lost a little bit. So patients feel a lot freer, and more mobile,” explains Cathy Craig the coordinator of the Tempus_G project.

Jim Henry reflects: “It is brilliant. It has made a big change for me, because it is exercise for fun”.

But researchers see even further. They are currently investigating if Parkinson s patients can improve their gait by just listening to regular sounds, including, for instance, the sound emitted by their own feet during walking.

Will Young a psychologist at Queen’s University Belfast explains: “Using these reflective markers we can get very detailed information about how people can regulate the timing of their walking. One thing that tends to happen with Parkinson’s is that patients tend to shuffle. And one thing we can measure is stride length, so we can look to help people to extend that length to walk more efficiently.”

Matthew Rodger also a psychologist at Queen´s University in Belfast says, “What this graph shows us is how the different parts of her body, so the head, the torso, the arms and the legs importantly, how these parts are moving as she walks. And so we can try to understand what sort of differences there are in the patient’s walking when she is perceiving the sounds, compared when she is walking without all these sounds. So we can check if there is any improvement, if there is a better stability in her actions.”

Researchers, scientists and patients who have volunteered hope that will lead to better easier and more effective rehabilitation treatments in the near future.

“To see that researchers are taking such an interest in the disease it is really encouraging. To see that there is a life with Parkinson’s. That it is not that you are just coming to an end,” says Mary McAllister a Parkinson’s disease patient.