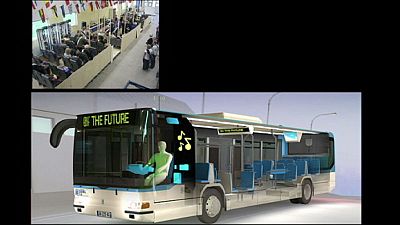 You wait and wait and then three come at once, so the old joke about buses goes.

But the bus has been getting a makeover.

Umberto Guida, the co-ordinator of the European Bus of the Future (EBSF) project said: “Half of public transportation in Europe is done with buses. But buses are still widely considered as the least efficient and least attractive transport system. So our idea was to bring about the renaissance of the bus.”

A brand new Number 16 bus running on one of the busiest routes in Gothenburg is part of the plan to re-kindle a love affair between Europeans and their buses.

And it’s a magic bus with a few tricks built-in to give passengers 20 percent more space.

Lars Carlden, an engineer with Volvo Technology explained: “To start with, we have these two new wider, sliding doors that allow a better flow of passengers. We also have foldable seats. We have 15 of them. During the peak hours, the drivers can lock them in the upright position. We have also put the driver in the centre between the front wheels, and we have moved the front wheels forward so that more space is generated. In the back, we have the new bellows (the concertina section linking the front and back parts of the bus) that are transparent. And by that means, we get more light into this area, because usually this area of the bus is very dark.”

It is the final prototype from a European Union research project aimed at developing quieter, cleaner and more user-friendly buses.

The vehicle seems popular with passengers in Gothenburg.

“It looks very modern, very nice,” said one. “It is very quiet, which I like. I guess it is a good thing with all these seats being flexible, good to fit more people in here.”

“It is easier to enter, and you have more free space,” said another.

Driver Thomas Thimour from Veolia Transport had his own perspective from the cab.

“You have different reference points,” he said. “As a driver, you are situated in the centre, and in all other buses, on the left. That means that if you use your old bus-driver brain when driving this bus, you are at least one metre too far to the left. One (difficult) thing is the communication with the passengers, since you are almost totally walled-off in here. That is not a too big problem, but it can be sometimes.”

Researchers used complex mathematical models to calculate passenger flows and accessibility with various layout designs at different times and stations for bus routes all over Europe.

They tested these and other theoretical models in life-sized mock-up made of wood.

Design engineer Oskar Rexfelt from Chalmers University of Technology explained: “That wooden bus was built up with modules so that we could change different aspects of the bus. We could for instance have a new front, new types of seats, or we could change the number of doors of the bus. And then we could see how those changes affected the passengers flow on and off, where do people chose to stand or sit, and so on.”

At the same time, scientists near Paris were developing a new all-in-one computer system that brings together the vehicle’s Information Technology features.

In Dresden, researchers on ergonomics used a bus simulator to pinpoint the needs and priorities of European drivers.

They studied two different scenarios; the more ordered streets of Dresden, and the more chaotic streets of Rome.

DVB driver Rene Wodni said: “The overall structure is well thought out. I can easily reach the controls now without having to lean forward. I would love to have an analogue speedometer instead of digital. And it would be good to have some storage space for my bag and to keep some water bottles.”

They looked at space, adjustability, comfort and visibility.

And the research helped unveil some distinct differences between the priorities of bus drivers in northern and southern Europe.

Günther Nirschl is an ergonomics engineer at the Fraunhofer IVI.

“They assess some things quite differently in Rome and Dresden,” he said. “Drivers in Rome, for instance, are more concerned about security – they’re not very taken with a driver’s position that’s open to the public. For Dresden drivers, the main thing was storage space – that’s what they commented on most – but that wasn’t at all a priority for the drivers in Rome.”

The road ahead for the researchers is now about installing the newly developed design layouts in more fuel efficient buses, with far more highly developed computer systems.

And, they say, they are not short of new ideas.

EBSF co-ordinator Umberto Guida told us: “In 20 years we will have modular buses that will be able to adapt themselves to the quantity of passengers that they will have to transport in a given time or place. In 20 years we will also have buses whose ‘state of health’ – the functioning of the motor, the doors, etc – will be completely remote-controlled from a distant computer office. That will prevent a bus from breaking down in the middle of a street.”

The researchers say that for bus techno-evolution to become fully efficient, there will also have to be a new generation of urban infrastructure.