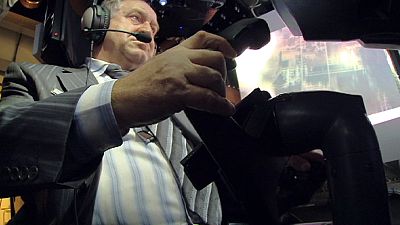 A December 2006 training flight above the Moscow region nearly ended in tragedy.

“The trainee made a mistake. That caused the plane to enter a very steep stall. The plane got into a spin, and started to dive. It was a very difficult situation, completely unexpected. But we managed to use our experience to recover the plane,” says test pilot at the Gromov Flight Research Institute Vladimir V. Biryukov.

With over 20.000 test flight hours in more than 60 different aircraft, Russian Captain Vladimir Biryukov is one of the world´s most experienced test pilots.

That day his skills helped to avoid a catastrophe.

But not all pilots are ready to expect the unexpected. And that is why researchers are flying to their help.

It is early morning and already there is hectic activity at a Dutch research institute. Here scientists are testing the ultimate flight simulator.

It is programmed to train for “upset events”: dangerous navigational conditions that can have dramatic consequences.

“An aircraft is very safe. Let’s say that first. But at the moment we have seen that the couple of accidents that do happen, often involve loss of control of the aircraft. So that is the pilot not being able to fly the aircraft out of an upset event,” says Aerospace engineer at Desdemona ltd. Mark Wentink.

Extremely rare, upset events have a number of causes and can indeed be dealt with.

But even the most sophisticated existing flight simulators cannot accurately simulate the nightmare conditions inside a plane during unexpected, extremely difficult flight conditions.

“In existing simulators, the main task is how to teach pilots to prevent upset events. But if for some reason the plane actually gets into that circumstance, the pilots have to know how to recover from it correctly and safely. And existing simulators can’t provide that training, because they have limited mobility,” says Biryukov.

“A stall is quite a complex physical phenomena that involves multiple unknown factors. But we basically understand the physics involved: under certain angles of attack, the air flow is disrupted and the plane lift begins to decrease. Based on this understanding we have developed the mathematical models that allow to recreate these effects more or less accurately,” says Aeronautical engineer at Leicester’s De Montfort university Nikolay Abramov.

And today scientists from a European Union research project are testing those models – steadily increasing the seriousness of the incident.

“Upset scenarios depend a lot on the aircraft type. You have for example symetric stalls,

the wings are perfectly symetric and the only thing the aircraft does it to drop the nose. The aircraft loses lift, it goes down. The pilot corrects by decreasing the attack angle and makes a recovery. But there are also stalls where you have an asymetric configuration, for example; one wing might stall first. And if one wing stalls before the other, the aircraft makes an upwards roll motion. The nose dives, and the pilot has to recover again. But all of them, all stalls, require pulling some G-forces when recovering,” says Wentink.

A last round of tests, with amazingly strong, 2.5 G forces involved, is set for the evening session.

Complimentary research crucial to the testing had previously been done not far away from Moscow, at some quite unique aeronautical research facilites.

The logarithms used to mimic upset events were extracted from thousands of experiments in wind tunnels, training simulators and other research labs specialised in aerodynamic forces, analysing the strength, durability or aero-elasticity of planes flown in extreme conditions.

Vladimir Biryukov has spent thousands of hours in these simulators. His testing helped to develop the mathematical models for critical flight scenarios.

“These scenarios have to provide reliable information. So for instance we need to take into account the influence of G-forces on a pilot’s perception, or how does the pilot feel speed angles, or how he feels linear G-force. And for us to extract the right information on all this, we need scenarios to be simulated in an accurate, undistorted way,” says Aeronautical engineer at TsAGI, Larisa Zaychik.

Back in the Netherlands, the final extreme scenario is accurately achieved by the simulator.

The tests have been rich in discoveries for researchers.

“For example we discovered that if you have a pilot who has actually little or no experience in feeling G-Forces in a real aircraft, that pilot will be overwhelmed by G-Forces when he first feels them. So if you give a pilot the task to pull 2-G, it will probably be too conservative, and he’ll only pull 1.5 G, which may be insufficent for recovery in a dangerous situation,” says the co-ordinator of the SUPRA project Eric Groen.

After exhausting hours of flight simulation, Vladimir seems satisfied with the preliminary results.

“There are still some problems related to what we call the ´Coriolis effect´, the effect that acceleration provokes on pilots´ brains: it is still not that realistic. That problem needs to be solved somehow. But nevertheeless, I’ ve got to say that simulators like this one seem very promising,” says Biryukov.

Now researchers can look at the future.

“Currently regulators are making rules that will mandate upset recovery training for commercial pilots. And when that happens, I think it is most likely that this kind of training will be performed on existing flight simulators. Now we can upgrade those simulators to actually reproduce the upset recovery behaviour in a correct way,” says Groen.

“We Russians have a saying, ‘It’s better to see it once than to hear about it hundred times’. So I believe any pilot could take advantage of training like this,” concludes Biryukov.