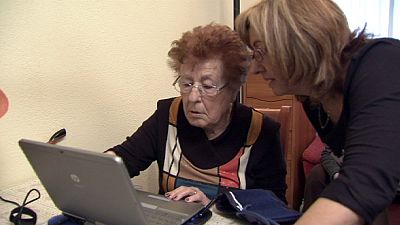 Three people reflect on how computer technology is helping them to cope with disease due to ageing.

“I was working and felt completely exhausted. I just couldn’t breath and was suffocating. I was taken to a clinic,” said Antonio Guillón Barros.

“We moved from the countryside to this apartment. My husband suffers from Parkinson’s. We can’t go out that often. But we still try to be active,” explained Irma Widman.

“My mother started losing the keys, her bag. She forgets names and skills, all these things,” said Marishol Bahi Samalde.

Europe is ageing and as people live longer they are fighting diseases while maintaining a quality of life. The latest technological tools are helping them sustain their health while staying at home. That is because a helping hand is now just a few clicks away.

Sixty-nine-year-old Antonio Guillón Barros lives in Cadiz in Southern Spain. He suffers from Chronic Obstructive Pulmonary Disease (COPD); his respiratory system can narrow so much that he starts to suffocate. Every day Antonio writes the answers on a tablet computer to different questions about his health and records sounds from his respiratory system.

The aim is to prevent and deal with an eventual respiratory crisis without Antonio having to be rushed to hospital.

“Being taken to casualty is mad. I waste a couple of days there having radiography and blood tests. What for? I have already had radiography thousands of times, and I am running dry of blood. They know what my disease is. So this computer tells my doctor if a crisis is about to start. He can advise me what I can do. It is like having a doctor at home.”

Daily data is sent online to the hospital. Each patient has a figure for their average health state. Their daily answers and sounds make that number increase or decrease.

If it increases radically, doctors will intervene to head off a fresh crisis.

“In future we’ll be able to predict the start of a crisis. We’ll adopt tailor-made treatment that we’ll send online or over the phone to the patient, who will be able to take care of himself better without necessarily having to go to hospital,” explained Antonio León, Respiratory physician, Puerta del Mar University Hospital.

The same system has been tested with older, more dependent patients in a retirement home, also in Cádiz, in this case with the help of social workers.

“When patients don’t breath normally, even if it is not a huge crisis, they think they are about to die; they panic, and suffer from anxiety and depression. This system provides them with more security,” pointed out María Luisa Rodríguez, a social worker, with the provincial council in Cádiz.

Both the software and hardware were developed by scientists at a European Union Research Project.

The different prototypes evolved over time, to include scientific advances and took into account the preferences of the final users when it came to adjust the shape or interfaces of the devices.

First test results are promising according to Luis Felipe Crespo, the Coordinator of the AMICA project

The problem is different in Northern Sweden. Researchers there are finding ways to prevent social isolation. In Irma’s living room, when the prototype curtains turn green it tells her and her husband a new e-mail has arrived; red means a reply is needed urgently.

A special platform with facial recognition software has been developed to identify the users mood, whether they feel happy, stable or sad.

The information is automatically sent to social and family networks.

“This platform has helped me to be much more active socially. New technologies and social networks, are not just for younger generations. We elderly people can also take advantage of the huge possibilities,” said Irma Widman, research project volunteer.

Irma and her husband are often invited to focus groups to hear about new devices like coloured spheres. The colours remind older people to get in touch with family, friends or social workers online or on the phone.

An easy way to break their feeling of isolation which can cause depression and anxiety, said John Waterworth the AGNES project coordinator

Close to downtown lives Barcelona 82-year-old Victoria who has been suffering from mixed dementia since 2005.

She has, for instance, forgotten many of her cooking skills and often finds herself disoriented.

Together with her daughter, her principal carer, they have volunteered to test an online platform aimed at informing her doctors how she is each day.

“These exercises have helped her to structure her days. And they have allowed us to stay in a closer contact with her doctors. So we do the gym exercises, the music exercises and very often the memory games. All this depends on her mood. Sometimes, when she is tired, we prefer music to memory games; but the whole computer platform has been quite useful for her,” explained Marisol Bahi Sumalde.

Her mother said: “I want to say something. Everyday I go to their house… Oh, I just forgot what I wanted to say”.

Data from the exercises is then analysed by the patient’s clinical team. They can make live checks on how the patient is doing, and answer the carer’s questions, doubts or anxieties as pointed out by María José Ciudad, Neuropsychologist, Badalona Health Services, BSA

“We can check if the principal carer feels overwhelmed, or if she needs some help, or if she is doing OK, and we don’t need to intervene. With the patients, we can check the blood pressure, mobility, cognitive levels and if they feel more or less disoriented.”

Geriatricians consider the platform a great advance for dementia sufferers, as long as it does not replace the face-to-face consultations.

“I don’t want these devices to de-humanise the relationship we have with the patients. I don’t want them to become just a number, a word on a computer page. But I think these technologies are really effective in helping us to know more about our patients, staying in touch with them more often and providing them with a more accurate response to their needs,” stressed Ignasi Sáez, a geriatrician with Badalona Health Services.

And some new online users say they are finding the computers a useful tool to enjoy, while also learning to know themselves better.

“The sky is always blue when I go fishing and that is not down to chance. Now I first check the weather online at my favourite fishing spot,” said Henning Johnsson, a research project volunteer

Francisco García who is a chronic obstructive pulmonary disease patient, said, “Before I just didn’t drink enough water. The computer said it was dangerous not to. So now I drink much more water.”

Victoria Sumalde a mixed dementia patient explained: “When I have no time for the computer, my daughter calls and asks me what I had for lunch. Usually I don’t remember, so I first go to the kitchen, check to see what I had and then tell her, I cheat on her. Cheating on the computer is far more difficult.”