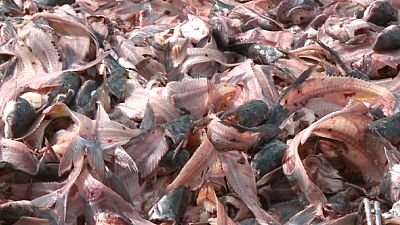 In Europe at least 20 percent of our food ends up as waste.

While new zero-food waste policies are on their way, researchers are imagining ways to turn current food-waste mountains into future green energy.

And they are testing their dramatic new ideas — some 13,000 kilometres apart.

“The dream was born during one visit here in Vietnam, some years ago. We came as simple tourists, and we were astonished to watch the deep, authentic relationship that Vietnamese people have with fish and fishing activities. And we also realised how entrepreneurial Vietnamese people are; how committed they are to hard work, and how much energy they invest when proposed new challenges. And we thought that it would be great if we could combine that fishing background and those entrepreneurial faculties to both improve the economic situation here and promote renewable energies. And that’s how this research project was born,” says Aulis Ranne, Technical Coordinator for the Enerfish project.

That dream has become a reality at a huge aquaculture factory in the Mekong Delta, south of Vietnam where 120 tons of fresh Panga are processed every day.

Fishes are filleted, frozen and packed, bound for European and Asian markets.

Some 80 tons of fish-waste is left behind, turned into fish oil.

But that was before scientists at a European Union research project proposed to turn the fish-waste into much more valuable biodiesel.

“We have fish oil, and I’m adding methanol mixed with an alkaline catalyst. After heating, stirring and mixing, we obtain biodiesel. So in our pilot plant, there we have the fish oil. We pump that fish oil into the reactor, where it is heated and stirred. Then we take methanol and mix it with the catalyst. And later we add the resulting mix to the fish oil. The final product is repeatedly cleaned with water; the resulting biodiesel is separated and stocked,” says Teija Palmén, a chemist at Sybimar Oy.

The plant’s design, building and testing is the result of four years of cooperation between European and Vietnamese researchers.

At full capacity, the plant will be able to produce up to 13 tons of biodiesel per day.

Both the processing plant and its complex cooling system will be monitored online to determine its energy balance.

“We’ll check how much electricity the whole system needs to work. And then we’ll check how much biodiesel the plant will produce, and how much electricity the generator will be able to transform with that biodiesel. It is our expectation that, at full capacity, this plant is going to be very efficient from an environmental point of view,” said energy efficiency engineer Florian Griessl of TüV Rheinland.

The resulting biodiesel could generate up to 150 megawatts per hour daily; enough to power the entire fish factory and also, researchers say, to provide electricity to the surrounding community, very dependant on fishing activities.

“This pilot biodiesel plant is a good example of technology transfer from Europe to countries here in Asia. Other aquaculture factories here in Vietnam or other countries like Malaysia, China or Indonesia, will maybe also install similar green generators in the near future,” explained Ranne.

“It is a win-win situation for everybody. We are recycling energy, eliminating waste, protecting the environment, providing affordable power to our neighbours, and creating jobs. All this will help us to increase our future investments in sustainable development,” said the General Director of the Hiep Thanh Seafood company, Phan Van Nguyen.

Food-waste related sustainable development has its own specific challenges some 13,000 kms from the Mekong Delta.

A plant in Ludlow in England transforms around 18 tons of food-waste into 2,500 cubic metres of biogases every day. It is mainly methane, which is then used to produce electric power.

The process is called anaerobic digestion; food-waste compounds are broken down by micro-organisms in the absence of oxygen.

The resulting gases are captured, separated and stored.

But scientists from another European research project think the system is still far from efficient.

And they are working to improve the procedure to yield more biogas out of the same quantity of food-waste, and over a prolonged period of time.

“When we started, people were starting to digest food-waste as a single material by itself. And they were having big problems with the stability of the digesters. In the current research, we have been able to work out some fundamental scientific understandings of what’s happening in the digester, which groups of micro-organisms are operating, and contributing to different metabolic pathways by which the foodwaste is broken down” said the co-ordinator for the Valorgas project, Sonia Heaven.

“So far, we have identified two concrete micro-nutrients that can help the anaerobic digestion. These two elements are silicium and cobalt. We have added small doses of both to the bioreactor. Our tests have shown that both elements help to keep the bacteria alive, so the process is able to produce a bigger amount of biogas, over a longer period of time, using the same quantity of food-waste,” explained the University of Southampton’s Ludwig Gredmaier, a mechanical engineer.

The project is also helping to better identify different food waste habits in different European regions, with some surprising discoveries.

“We looked at the waste characterisations by actually hand sorting the waste, to look at the variety of different wastes that people throw away. We discovered that here around the plant’s region 50 percent of the wastes that households throw away are vegetable and fresh fruit peelings. And about 12 percent of that waste is uneaten fresh fruits and vegetables. One of the most surprising results is that in the region around here 10 percent of the waste that come to our plant here are teabags,” said Becky Arnold, a soil scientist for BiogenGreenfinch.

Researchers conclude that this is significant data to try to improve existing biorreactors, making them better adapted to each European region’s food waste habits.