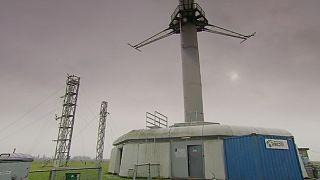 A 200 metre tower is one of the tools being used to crack one of the trickiest problems in climate science – clouds.

“We are measuring temperature, humidity and wind in this tower. We are doing that to understand how clouds are being formed,” explained Siebesma.

Cloud-watching instruments are scattered across this site in the Dutch countryside, including radar to measure cloud droplets, solar radiation sensors, and a laser to track cloud height.

It is essential research because the cloud question has profound implications for the study of climate change.

Clouds are one of the defining features of our planet. They cover approximately two thirds of the Earth’s surface. Siebesma thinks this may change if we keep polluting the atmosphere:

“If climate change only increased greenhouse gases, such as CO2, it would be a relatively simple problem. If CO2 doubled, the global temperature would only increase by 1.2 degrees. But our planet has a dynamic climate system, and clouds will respond to this global increase of temperature.”

This dynamic system is being studied from several angles within the EUCLIPSE project. Among the research team is one of the contributors to the UN’s IPCC reports on climate change. Sandrine Bony is a climate modelling scientist. She stressed that even when it comes to studying the basics of the role of clouds in climate, results are complex and even conflicting.

Bony uses satellite data to study clouds from space, and compares them with clouds in the climate models. In the past, scientists could only see if there was cloud cover, not how deep or layered it was. However, in recent years, this has changed.

“For a couple of years now, since the launch of the Calipso and Cloudsat satellites in 2006, we’ve had completely new information about the vertical structure of the clouds that allows us to better understand the conditions of cloud formation. Now we can evaluate the realism of the clouds simulated in our climate models better,” said Bony.

Having a 3D view of clouds from space has been an eye-opening experience, explained Bony, as she compares their models with reality.

“This map shows the distribution of low clouds observed by the CALIPSO satellite during 2008. In the old version of the model, we can see that the model seriously underestimates the low-level cloud cover compared to observations. In the more recent model version, we manage to simulate the clouds a little better.”

The low clouds are one of the most difficult for climate models to reproduce and predict. Back in the Netherlands, another partner in the EUCLIPSE project, Stephan de Roode, is looking at the problem on a much smaller scale.

“We are using state of the art turbulence models with which you can zoom in at scales of about 30 metres. So basically we can really see what’s happening in the clouds in terms of dynamics and transport of heat and moisture.”

De Roode’s 3D computer simulations offer a detailed and interactive way to study low clouds. He wants to know if there will be more or less cloud cover in a warmer climate, so he has been experimenting with different parameters.

“If we are able to show that our model results are very close or agree with the aircraft observations then we can do sensitivity tests, so we can play with the external forcings. For example, what happens if we increase the sea surface temperature? What happens if the mean horizontal wind changes? What happens if the temperature at 1km height increases? How does that affect the cloud amount in the lower part of the atmosphere? These are the questions we’re asking with our models.”

At the moment, the study of clouds seems to offer more questions than answers. However, some new discoveries have been made using the satellite data and ground observations.

“One of the things we are finding is that there are actually more mid-level clouds than we thought initially. There are also a lot of mid-level clouds, not high or low, lacking in climate models,” said Siebesma.

Part of the difficulty in monitoring clouds on a global scale is that our atmosphere can not be broken down into easily manipulated units.

“Climate models run on a rather coarse resolution. Essentially they are blind for anything smaller than 100km and most clouds aren’t as big as this. We want to get a better grip of them, so we need to measure them better, as we’re doing at Cabauw, or from space with satellites. We need to model them better with high resolution models, and then put all those results into climate models in order to make better predictions,” explained Siebesma.

Those predictions will then be fed into the next IPCC report on climate change, due out in 2013.

For more information, go to: www.euclipse.eu