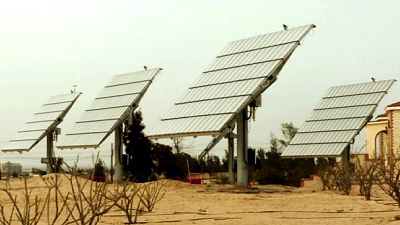 In the harsh, isolated, semi-desert region north of Cairo in Egypt, 150 acres has been planted with beans, peas and orange trees. But there is a problem: an endless need for water.

Farmer Tantawi Mostafa explains: “Each plant needs a certain amount of water, depending on the season. Peas, for instance, need a lot of water, I have to irrigate them at least five hours a day. Oranges and grapes need less water during the winter season. But in any case, I never need less than 4,000 cubic metres of water per day.”

They used to rely on old diesel pumps to bring the water to the surface. But local scientists have come up with different solutions to answer a whole range of problems.

Fuad Ahmed Abulfotuh, an electrical engineer at the Egyptian Ministry of Water Resources and Irrigation, said: “In Egypt these diesel pumps are widespread. And we want this to change. These diesel machines have many inherent problems; they are very noisy, and very polluting. They release lots of toxic gases into the atmosphere. Also, they are quite expensive to use and maintain. You need to buy diesel, pass technical controls, change the motor oil, and buy spare parts. All this comes at a huge cost to farmers.”

So how can water be pumped to the surface in a green, cheap way in these isolated regions? Researchers from NACIR, (New Applications for Photovoltaic Concentrators) are looking at the sun for answers.

Gabriel Sala, the coordinator of the NACIR project took euronews to an experimental station where she explained: “We are testing the use of renewable energies to pump water and to provide irrigation in semi-desert regions.”

The experimental station is well off the beaten track. And these are not ordinary photovoltaic panels. They use a brand new generation of photovoltaic cells built in Germany as part of an EU research project.

Andreas Gombert, an optical engineer with Concentrix Solar/Soitec, gave the technical rundown: “Our system, concentrated photovoltaic technologies, consists of a panel of lenses in which 200 little single lenses concentrate the sun’s rays on very little solar cells. They’re really miniscule. The front section only focuses the light. If we look at the rear section, we see little squares that are actually heat reducers, which absorb the heat. The photovoltaic solar cells are inside those squares. Each cell is only two millimetres in diameter.”

The trackers follow the sun all day. They are thought to be far more efficient than ordinary photovoltaic panels.

In ideal conditions, each tracker produces around 50 kilowatts of electricity per hour. Spanish researchers from Instituto De Sistemas Fotovoltaicos de Concentracion (Institute of Concentration Photovoltaic Systems) are measuring the efficiency of the trackers in different meteorological conditions.

Maria Martinez, an industrial engineer with ISFOC, said: “The clearer the sky, the more radiation, and the more energy these panels can generate. Temperature works the other way round. The hotter it is, the less energy the trackers will produce, but temperature is not an big factor. Wind is more important. A slight wind will increase energy production because it will lower the heat on the surface of the mirrors, cooling the whole system and making it more efficient. But strong winds can interfere with the trackers’ movements. A strong wind can also leave dirt on the mirror, which can significantly reduce energy production.”

Energy is transformed and stored using a complex system set up by German electrical engineers.

Alexander Schies, an electrical engineer with the Fraunhofer Institute for Solar Energy Systems, said: “We receive alternating current from the panels, which arrives here and is fed into the AC (alternating current) main power grid. Three inverters establish an electrical grid, and when there hasn’t been any sun for a few days, they also supply power to the panels so that they can rotate towards the sun. There is a DC (direct current) control box, which measures the power and stores it in a battery. The power reservoir is small, just enough to power the captors for two days, so that they can follow the sun even when it’s cloudy.”

Electricity is then used to pump water up from a depth of almost 40 meters, desalinate it, and irrigate nearby experimental wheat fields, supervised by local researchers.

One of those, Fuad Ahmed Abulfotuh, said: “We are going to invite farmers from the region to come and see these experimental crops. This wheat field will teach them more than 1,000 speeches and conferences about the benefits of renewable energy could do. People will see with their own eyes, and learn how to take advantage of concentrated photovoltaic energy. And we are going to help them understand those advantages. When we get all the data, we’ll translate it into figures so people will know how much they need to invest, and how much they’ll get in return. In this easy way they will learn how useful this technology can be in their daily lives.”

And scientists say that farmers will not be the only winners – similar stations could be developed in other isolated, semi-desert regions.

NACIR project coordinator Gabriel Sala said: “We will only have to import the concentrated photovoltaic cells from outside Egypt. All the other materials used in this experimental plant are conventional. Glass, mirrors, metals, iron; all these materials can easily be obtained locally. So we are creating jobs. The system will not only improve farmers’ living conditions, but hopefully improve conditions for everyone living in isolated regions. We are tackling a global energy problem with a local approach.”

And scientists hope that this could soon become a reality not only in Egypt, but also in other countries which have inefficient electricity generation and supply systems, but lots of sunlight!