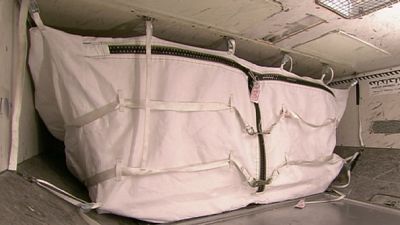 Aviation safety is a worldwide concern. European researchers want to prevent further catastrophes with the help of textiles tested in explosive ways. At a British research centre experiments are being conducted into the effects of bomb blasts.

Researchers have developed a textile container designed to prevent the effects of small bombs hidden inside luggage which is then carried in aircraft cargo holds.

Donato Zangani, coordinator of the “Fly-Bag” project explains: “In our first test we want to measure how effective our prototype is in containing the explosion and the fragments it will emit, along with the subsequent expansion of gases.”

Jim Warren is a blast engineer for Blastech: “In a typical suitcase that people take on to aeroplanes for their holidays there are usually lots of clothes and things. Inside we put a small explosive charge enough to bring down a plane. The case then goes in the container.”

The first explosion barely affected the prototype which has been developed under a European Union research project called Fly-Bag.

“The container has been constructed with a combination of different layers of technical textiles,” said Donato Zangani. “Each has its own characteristics. Some textiles have been positioned in different places to withstand the penetration of fragments flying out during the explosion. Some other textiles have been designed to be able to expand in a controlled way so the container can stretch without tearing itself apart.

“Besides that, we have produced an internal coating with two aims. The first is to contain the gases generated during the explosion. The second is to strengthen the resistance of the whole structure, so that the coating becomes a sort of flexible composite inside the container.”

Damaged luggage is then taken out of the Fly-Bag and new baggage put inside for the next test in which the amount of explosive has been increased by 50 percent. But again the bag holds tight.

But first, in Sardinia, Italy, inside a maintenance hangar at Olbia airport, scientists have been trying to understand the realities of routine baggage handling. A Fly-Bag has already been installed inside a commercial plane.

Donato Zangani again: “This is truly an applied research project. We really wanted to produce a prototype that could allow airlines to test the effective implementation of the whole system. So we’ve produced a full-scale prototype and tested how useful it could be to airlines, that is can it be easily loaded with baggage and can it be easily operated, without the need for particular skills.”

Airline companies will be the main end-users of the textile container, and the local carrier has played its role in developing the prototype.

Fabio Caronti of Meridiana Maintenance said his company wanted to offer travellers a new tool to guarantee their safety.

Meanwhile back in the UK, the ultimate test -double the original explosive charge is set off and the bag still holds.

Jim Warren commented: “Obviously we would not seek to protect against the maximum amount of explosive that you could possibly get into a bag. That would be around 20 kilos, which would certainly be enough to bring down an aircraft and many domestic buildings in fact. So we have to balance how much explosive we could protect against, against how much weight you are allowed to carry into the aircraft. The Lockerbie attack was less than half a kilo, that brought down a (Boeing) 747. And recently the DHL attempted attacks were a few hundred grams. This container would seem to be able to protect against that kind of attack.”

Researchers say the successful testing is a first step to ensuring that bomb-proof textiles could soon really improve aviation safety in our increasingly crowded skies.