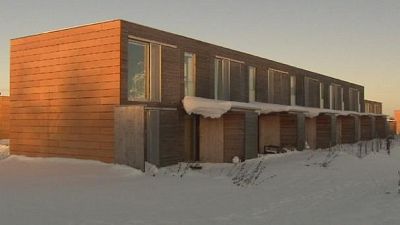 Maybe in the future more houses will be one that euronews visited in Aarhus, Denmark. Around 50 people are living in revolutionary homes that use energy in a new way. In terms of costs, it means cutting heating bills from over 200 euros a month to less than 50, even if it is very cold.

One tenant, Agnete Dorph-Jensen, explained: “We have solar cells for the lights outside and for the common area and for our laundry. If there were solar cells on the top of the roof, that would be perfect. Then we could save a lot of electricity.”

These buildings use up to 70 percent less energy than conventional ones thanks to the technologies defined in the SHE (Sustainable Housing in Europe) project – an European Union Research Project involving four different countries.

SHE Coordinator Palle Jorgensen said: “It is quite simple. It is very, very simple to save energy. We know how to do it. We can see here nearly 100 percent renewable materials, 90 percent of the houses is made from wood.”

In Vienna, Austria, another European Union Research Project is designing a city for the future, taking into account all sorts of issues – climate change, CO2 emissions, land-use.

Christof Schremmer of the Austrian Institute for Regional Studies and Spatial Planning is the coordinator of the project. He said: “This is the edge of the city which tends to became a suburban, low density kind of settlement on the outskirts of the city, and we should avoid it. The city of Vienna of course is trying to achieve that, but there are still many holes to be filled.”

According to analysts, the urban areas of Vienna will expand by 54 percent over the next 40 years, covering an extra 100 square kilometres of land. But with this new approach, the same growth will cover only 20 square kilometres.

Christof Schremmer explained: “So far in development we have three separate approaches: transportation planning is one thing, energy efficiency of buildings is another, and then designing of architectural, in quality terms, is the third approach. With this project we try to see how in the future development of cities these three approaches can be combined.”

Using the principles of urban metabolism, researchers have defined some critical points, where action can dramatically cut environmental impact.

Christof Schremmer said: “Well if you can do three or four trips per day in just one area like this without going out the town, you don’t have to use a car, and you have of course much less use of energy; you do not have CO2 emissions, you do not have to use so much land. So, this is efficient in many ways.”

The SUME (or Sustainable Urban Metabolism for Europe) project runs in partnership with institutions from nine countries and two continents. It aims to design a model for towns of the future.

Back in Denmark, they are researching how to reduce energy consumption, and pollution. They are also raising awareness about ecological issues.

The Aarhus experience has resulted in inter-action with local policies. Using the same approach, the city authorities in Aarhus are drafting the next steps.

Niels-Peter Mohr, an architect working for Aarhus Municipality said: “We also want to make new cities. We have four cities in the pipeline, and they are all related to our new tram light-rail system. In this way, we mix the coming new citizens of Aarhus when they live there they can go on our new tram system, and live into an house which is sustainable, like the ones you have seen this afternoon.”

The project also involves Italy, Portugal and France, where there are more pilot experiments. Seeing the economic and ecological sustainability of the results, new projects are now starting all over Europe.

SHE coordinator Palle Jorgensen: “We have created the possibility for the politicians to say that now it’s not a fiction anymore. Now we can change the building regulation and the buildings laws, for this kind of project.”

Housing and city living are two of the biggest culprits when it comes to environmental damage. Greener houses and sustainable cities are two steps towards reducing that damage.