A video of young male Syrian refugee attacking an innocent passerby with a belt on a Berlin street sent shockwaves across Germany. The victim was targetted because he was wearing a kippa, the traditional Jewish headgear.

The country's Jewish community, around 100,000 people, is becoming increasingly fearful that a new kind of antisemitism may be on the rise, linked to the growing number of Muslim migrants.

The Michalski family are Jewish. When the Syrian refugees started to arrive, they opened their Berlin home and offerred shelter to one for a year. It worked out well. Wenzel Michalski says his 14-year-old son even changed school so he could continue to be with classmates from a migrant background. That's when things started to go wrong, Wenzel says. 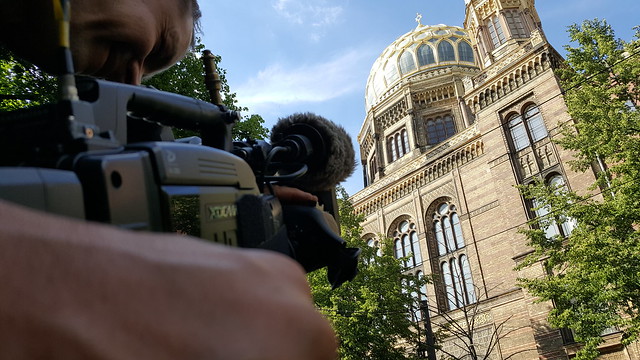 "At the end of his first week at this public school the teacher asked: 'which houses of prayer do you know?' When it was my son's turn, he said: 'synagogue'... and the teacher asked: 'Why do you know about synagogues? Are you a Jew?' And he answered: 'yes'... and this was the end. Immediately afterwards the bullying started. He was kicked and beaten."

Michalski says his son was even threatened with a replica gun: "First, two older boys put him in a headlock and strangled him so hard that he soon lost consciousness. Later on, another boy with a kind of replica weapon rushed towards him and pulled the trigger."

The Michalski family has mixed roots, Jewish and Christian. The generation of Nazi-era Germany were discriminated against and persecuted. Only some members survived the war.

"My father wrote a book about this time", Wenzel says. "But it's crazy; even after the war, at the age of 14, my father experienced antisemitism. He went to Berlin's Canisius-College, a school run by Jesuits. He was the same age as my son is now. Back then my father suffered antisemitic bullying at school... and exactly the same thing is happening again, today, 70 years later, to his grandson. That's terribly shocking."

Michalski says the school authorities and social workers failed to prevent the antisemitic bullying. To escape it the Michalskis moved their son another school.

"Because of this experience, my son started to learn karate. He's quite proud that he got his red belt, his first karate belt. On the top of that he does weight training, and really, he's already built up some muscles... like quite a few other Jewish kids around here, as well."

The vast majority of Muslims in Germany support democratic principles of religious tolerance. But some Berlin neighbourhoods, such as Neukölln, come under scrutiny from German intelligence agencies on the look for suspected links to Hamas and Hezbollah. Here, there is no need to go undercover to record shocking hate-speech. A young man with Palestinian roots made that clear to our reporter:

"The Jews must be erased," said the young man, who gave his name as 'Abu'. "Hitler killed 90 percent of them. He left just over 10 percent. That's good. If Hitler had killed the Jews at that time, they would have taken over the whole world."

But those words don't reflect the views of the overwhelming majority of Muslims in this community. We asked other people how they felt about living in peaceful co-existence and life in a multicultural society:

"We are all human beings, whether you're a Jew, a German, a Christian, a Muslim. One has to respect all Muslims, Christians and Jews around the world. Everyone has to respect each other," said Amal, a young women who talked to Euronews.

'Meet-to-respect' is an anti-discrimination project in which Ender Cetin and Joelle Spinner take part. This Muslim-Jewish team take their message to mixed-community schools. Joelle is active in the Jewish community and married to an orthodox rabbi. Ender, was head of Berlin's biggest mosque for a long time.

"Do you know the meaning of the word discrimination?," Ender asks a group of intrigued youngsters in a talk group in Berlin's Beerwinkel school. "During my first year at school I was an outsider because I didn't speak German very well," replied Fatima.

"My mother is a Pole, so I am a Pole too. And because of this, quite a lot of people say to me that I steal," added Erik.

"When I wanted to play with Turkish kids, sometimes they excluded me because I am Kurdish," said Cem.

Joelle puts those experiences into context for the group: "It's ok to be and to feel different. But it is not ok to get and to feel excluded."

The Meet to Respect project speaks out against any kind of discrimination. The young people discover that Jews, Muslims and Christians share common values and learn to accept each others differences.

Cem offers his view: "Muslims, Christians and Jews can be best friends. Friendship is better than war."

"For me it was important, all this about Jews and talk of exclusion. It's not easy for us children. I mean, in general children don't choose their religion themselves," adds Fatima.

Campaingers say antisemitic hate-speech is occurring all too often in German schoolyards and that civil rights activists such as Ender and Joelle are needed more than ever.

"All kinds of violence or hate is wrong, is bad," says Ender. "We are people of faith and we stand up against all of this. Our religions stand for respect and offer charity. And being a role-model, we show this. That's why we are here."

Joelle stresses the importance of face-to-face encounters: "We are also here to show the children that prejudices are completely wrong. I mean, some children sometimes have prejudices against Jews. We invite all kids to have a close look. I am a Jew, you can ask me everything you want to know."

In Frankfurt students tackle antisemitism in another way. The city hosts 'Kippa Day', in which people are urged to wear the Jewish headgear for a day. The Wöhler school participates, and with good reason, according to its student council president, Carl-Philippe Spahlinger. Some two years ago, in this schoolyard, some pupils used antisemitic hate words. Teachers reacted immediately, dealing with those involved. In 2001, the school launched a project digging deep into history, discovering what happened to its Jewish pupils in the Nazi era. 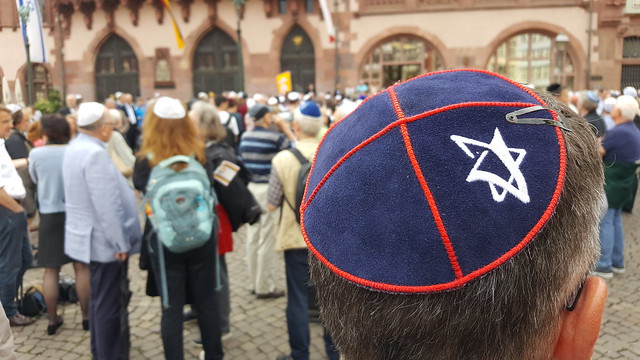 Standing by the school's memorial Spahlinger says: "We commemorate those students who were murdered during the Nazi era. Today we take part in the city's 'Kippa Day' to protest against antisemitism. This morning, we've already distributed 130 kippas in front of the school. At the same time it's important to go further: we're not only raising the alert about antisemitism, but all kinds of discrimination."

For many years Rabbi Daniel Alter had the role of monitoring antisemitism. In 2012, while wearing a kippa, he was beaten up. The rabbi's young daughter witnessed the attack, in which he was set upon by a group of young Muslims who broke his cheekbone.

In addition to the antisemitism of the far right, some in Germany fear Islamic-inspired hatred towards the Jews is rising with the influx of migrants. As the victim of an antisemitic assault Rabbi Alter has mixed feelings:

"On the one hand, it is completely the right decision, in my opinion, that such a wealthy country such as Germany, within the bounds of possibility, welcomes people fleeing war and persecution. That is right. I am for it. But on the other hand, just think of Syria, for example . A lot of refugees are fleeing societies where hatred of Jews and hatred of Israel are almost an integral part of the State."

"Is there, again, a problem with antisemitism, in Germany?" we ask him.

Symbolic actions — such as kippa days — may not be enough to stem the tide. Antisemitism activists say school authorities and teachers should be trained to deal with hate speech when it arises. Parents have to be involved. Social workers have a role to play. And, it's argued, Muslims with antipathy to Jews arriving in Germany should get educational support in combat antisemitic stereotypes.