Germany’s economy is booming. The unemployment rate is low. But at the job centres, people keep queuing up.

Many have a job, but they are known as the working poor. They have qualifications, but their badly payed – often part-time – jobs or temp-work don’t cover basic needs. Social benefits help top up their income.

Among pensioners, too, poverty is growing. Monika Sagertsch from Berlin is trained as a sales manager but never got a full-time contract.

“They don’t want to pay. I am too expensive. They prefer to hire non-qualified workers for 8,50 euros an hour. They would have to pay me higher wages,” she explains.

In 2003, Germany launched a radical labour market reform. Unemployment benefits were reduced and temp agencies were given free reign. The key words were liberalisation and flexiblity. As a result, unemployment rates dropped but the low-pay job sector grew, along with the relative poverty rate. 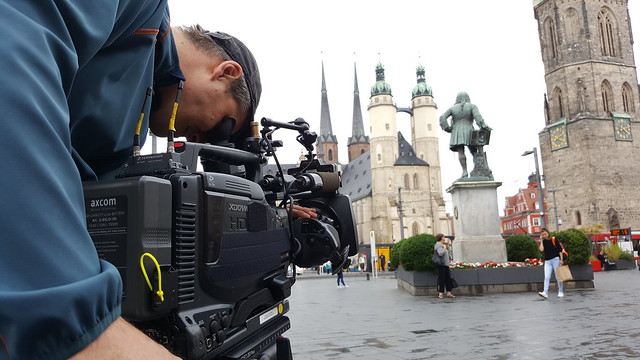 Our next stop is Halle in Eastern Germany. After the reunification, unemployment here was high. But employers complained about the high cost of labour in a competitive market.

We meet 60-year old Rolf Maurer who is self-employed. Mr Maurer is a very skilled craftsman who can fix pretty much anything. He does everything by himself and finds his customers on the internet. His business model is based on total flexibility. We ask him what risks he faces.

“Well, I never, ever know what kind of work I will get tomorrow, or the day after. In addition – and it’s happened to me – there’s always the risk of customers not paying up,” he tells us.

Asked about the impact this has on his hourly wages, he replies: “The Chamber of Trade recommends I take an hourly rate of at least 35 euros. But over recent years, when I’ve been offering my services over the internet, I’ve been taking much less – usually around 15 or 10 euros an hour.”

His first priority is to pay the rent on his small flat in the social housing block where he lives. What’s left is spent on tools. This means there is no money left to put into a pension scheme.

As a young man Rolf Maurer had a permanent job at a steel mill, but the plant shut down. Then came years of unemployment or short-term contracts. The job centre told him he had no hope of getting a full-time job: he was too old. So he decided to become self-employed.

“At my age, it’s not great to have to be self-employed,” he says. “Let’s put it this way: when you reach a certain age, you would hope to have a normal, permanent job. At the age of 60, it’s tough to start up your own business from scratch.”

He is not planning on retiring anytime soon – and this reflects a growing trend in Germany: the number of over-65’s still working has more than doubled in the past decade, up from 5 to 11 percent. Most of them need to work to top up their meagre pensions.

Berlin: the “capital of the working poor”

Back to Berlin, depicted as “the capital of precarious employment and the working poor” by some trade union representatives, including Dierk Hirschel, chief economist at one of Germany’s biggest trade unions, ver.di.

“The problem we face in Germany is that one in five workers are paid less than ten euros an hour, they are the “working poor”,” he says. “This is a result of the degradation of labour market rules. Germany is a rich country, there is no doubt about it. But Germany is also a socially divided country: in this rich country, the working poor are a reality – they are people who work 40 to 50 hours a week but who cannot make a living.”

It’s a problem that affects the building industry, hotel and catering, retail and the service sector, but also professions that require lengthy studies. Adriana Balboa and Jan Hoppenstedt are both music teachers at public schools in Berlin. They are meeting up with their friend and colleague Tilman-P Schulze, a video-blogger.

“Hi guys, welcome to my latest video-blog. Today I’ve invited two of my colleagues to have a chat about a really important topic. Let’s talk about pensions,” says Tilman into the camera.

The friends share their experiences. Father-of-two Jan struggles to put money aside for retirement. Adriana has been a teaching music for more than two decades. She’s set to retire in 2033. When she received the letter informing her about her future pension, she was shocked.

“Well, no-one will believe me when I say it so I will show you the letter,” she says, taking the document out of her bag and placing it on the table for everyone to see. “Here it is, in black and white. I will receive a monthly pension of 351.82 euros. I have to pay 400 euros for my flat, my pension won’t even cover the rent.”

“351 euros? Look at that! That’s nothing! It’s the result of all these freelance contracts, hourly invoices, not being paid over the summer. We have no stable income and we carry the entire risk factor of this profession on our shoulders,” exclaims Tilman into the camera. “OK, has anyone got any solutions?”

“We need a collective labour agreement for music school staff,” says Jan. “It’s all about decent pay! About dropping freelance contracts for each and every hour! About sick pay… Today, when you fall ill, you soon run out of money. And when a woman gives birth to a child, she should not lose her job.”

“Here in Berlin there are far too few permanent jobs: it’s the worst situation in the whole of Germany,” says Adriana. “93 percent are freelancers and just seven percent permanent staff.”

The city-state of Berlin has announced plans to raise the number of permanent contracts for music teachers to 20 percent. Not enough, say the three friends. Tilman has even composed a protest song to make his point. The lyrics speak for themselves:

“Lengthy studies, high qualifications
Chronically underfunded
We are working day after day
Precarious day labourers by law
Just enough money for a kebab
Summertime: no school, no pay
And we are all kicked out.
Berlin, Berlin, you’re ending up
Like a poor kid
Music does not pay
In such a cultural capital.”

The Institute of Economic and Social Research an independent academic institute within the Hans-Böckler-Foundation, a non-profit organisation fostering co-determination and promoting research and academic study on behalf of the German Confederation of Trade Unions (DGB).