Fulda Gap may be just a peaceful landscape of rolling hills today, but for over 40 years, during the height of the Cold War, this place was said to be the potential battleground for World War lll.

“We are standing here at the hottest spot of German history, of European history,” Ricarda Steinbach, director of the Point Alpha memorial, told Euronews.

“NATO and Warsaw pact troops were looking at each other only two meters apart, here at this point,” added Steinbach. 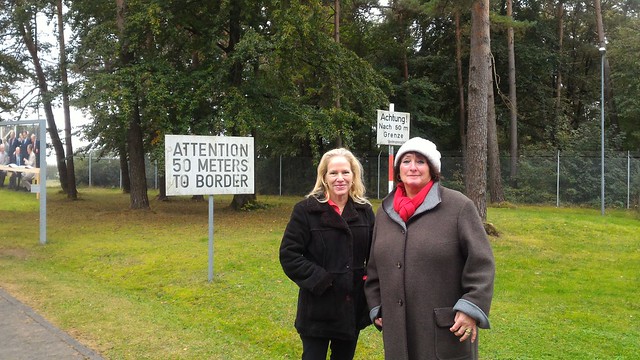 The fear was that Soviet troops would invade Western Germany and US-led NATO troops, numbering some 400,000 would retaliate .

And the bigger fear: that nuclear weapons would be used – devastating not only Germany but all of Western Europe.

This of course never happened.

But almost 27 years after the collapse of the Iron Curtain, this memorial serves as a reminder of the American presence once here and the gratefulness felt by many for a US military ready to defend Europe.

Renate Stieber worked as a public affairs officer with the US troops for 24 years.

During that time, she would come here almost on a daily basis.

*What does this remind you of when you come up here?*

“It reminds me of the duty the American soldiers carried out here, in the tower for example,” Stieber told Euronews. “That they were watching the area for twenty four hours which you can see right now. And what they contributed to our peace and freedom. As long as they were here, the western people could sleep well at night.”

Donald Trump
But with the world’s eyes glued on Donald Trump, sleeping well at night could get a bit harder.

Trump has made it no secret that when it comes to security, Europe needs to do more.

“I will make a long statement about NATO, talking about the fact that many countries are not paying their fair share,” Trump said in a televised speech during his presidential campaign. “That means we are protecting them and they are getting all sorts of military protection and other things and they’re ripping off the United States. And they’re ripping you off. I don’t want to do that. Either they pay up including for past deficiencies or they have to get out. And if it breaks up NATO, it breaks up NATO.”

Checkpoint Charlie, Berlin
For Trump, it’s payback time. Payback for all the years the United States sheltered Europe during the Cold War.

He has stated the fact that only 4 out of NATO’s 28 members pay the required 2 percent of their GDP in defence. But how do his European allies feel about this? And about him?

“Here in Berlin, like throughout most of Europe, the very idea of the next US president being Donald Trump seems almost surreal, like a big joke. But not everyone is laughing,especially when it comes to Trump ready to break-up NATO which has been the foundation of the Transatlantic alliance since 1949.”

Judy Dempsey is an Irish journalist from the Senior Associate Carnegie Europe. She has been covering NATO and European security and foreign policy issues both during and after the Cold War.

“Successive American administrations have said the same thing. And actually since the Russian invasion of Crimea, and in Eastern Ukraine, the Europeans are improving a little.

“As for NATO being obsolete, well what would the Americans do with their coalitions of the willing, like-minded allies? What would they do with the NATO alliance that sees the threats and challenges facing not only the United States but Europe as well.

“So to say that NATO is obsolete is like saying that the Transatlantic alliance that was built up after 1945 on the ruins of a destroyed Europe, that it’s over.”

Hillary Clinton
For Hillary Clinton, Trump’s comments on NATO are yet another in the long list of reasons she says Trump is unfit to lead the “free world.”

But despite the praise for NATO and its allies, she has given less concrete details than Trump on its future.

“We’ve got to do everything that we can to vacuum up intelligence from Europe, from the Middle East,” Clinton said. “That means we have to work more closely with our allies and that is something that Donald has been very dismissive of. We’re working with NATO, the longest military alliance in the history of the world to really turn our attention to terrorism.”

After World War Two, the US Marshall Fund poured billions of dollars to help rebuild Europe and to solidify the Transatlantic alliance.

*“Is there concern that even if Trump doesn’t win that there has been some damage to the Transatlantic alliance?”*

“I don’t know about damage,” David-Wilp, Deputy Director, US German Marshall Fund, told Euronews. “Trump has expressed extreme views and people are aware of that.

“But there is an acknowledgment that if Hilary Clinton becomes president, she will also expect a certain change in course when it comes to Europeans putting in more of a financial support behind collective security in NATO, taking on more of a responsibility when it comes to dealing with global challenges.

“So I do think that there is an expectation that things will be different.”

There’s little doubt that on both sides of the Atlantic, NATO’s raison d’etre is not what it was when Europe was divided.

But for some Europeans, regardless of who will be the next US president, the “ties that bind” will always be there.

*But you still feel very pro-American?*

“I will always stand up for the Americans,” Renate Stieber said. “Always. You can ask any politician here. As soon as the word American is said, I get a little bit aggressive, I defend them.