Should we stay or should we go? The Scottish answer to the Brexit question sounds very particular.

Our road trip started at Gordon Castle up in the North of Scotland. It is quite a special day: people from all over Moray gather on the greens. Thousands enjoy the Gordon Castle Highland Games. It is THE event of the year here around: Scottish fun and fierce fighting in competitions ranging from throwing a heavy stone and hammer to tough tug-of-war contests.

“The Brits are fighting: half of them want to stay in Europe, the other half wants to get out. It’s a suspense-packed battle and I’ve got the feeling that the vote of the Scots could be decisive. I’ll ask around a bit,” reports euronews’ Hans von der Brelie.

Sixty to 75 percent of the Scots are in favour of staying in the European Union, such as the members of a local folk group called “Footerin’ Aboot”.

We move on to Macduff, a small port town in decline. Most fishermen are angry at the European Union. For decades their number has decreased. Lot of young people left Macduff and many children grow up in poverty. But Ross Cassie blames the UK government for the decline, saying the region was neglected by London – and helped by Europe. Ross is member of the Scottish National Party, a left-wing, pro-independent and rigorously pro-European party – by far the main political force in Scotland.

“The local impact here within Macduff, the impact of the funding from the European Union is plain to see: the slipway you see behind me was, years ago, partly EU funded. – If the UK decided it wanted to pull out of the European Union, those particular schemes of funding will no longer be available – and towns like Macduff and other small communities across Scotland will continue to decline as opposed to flourish as they should do,” says Aberdeenshire councillor Ross Cassie. 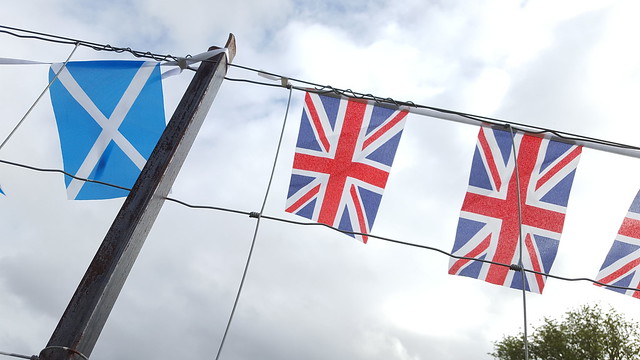 Taking the purse strings from London

People in Macduff have plans for deepening the harbour. This could back the local ship-repair-industry, create jobs and make a real change. They do not believe that the UK government will hand over the needed millions for structural change. But Europe could.

“I would say the people of Scotland would be quite rightly angered if they were dragged out of the European Union against their will by the rest of the United Kingdom. That would consequently lead – obviously – to further conversations being had within Scotland about our place within the United Kingdom,” claims Cassie.

Good for business, good for Scotland

The Highlands are the very heart of Scotland. It is a landscape spotted with historic castles and distilleries, highly romantic and a notable tourist destination.

John Harvey McDonough’s family history is closely linked to whisky production since 1770. John learned all about whisky trading by settling down in China where he lived for 20 years. A few years ago he came back to his beloved homeland. Like many entrepreneurs, he is the CEO of Speyside Distillers Company, John is against leaving the European Union.

“We have a huge business. We have maybe 80 percent of our business going to China, Taiwan and China. We have a growing market in Europe and North America so we have a huge market to go for – and our market is the world. It is the world, and the European Union is very important and part of that,” he says.

Thanks to European free-trade agreements export-oriented companies, (such as distilleries), sell their products more easily – thereby generating benefits and jobs. That is the main argument of David Frost – a former British diplomat and EU trade negotiator, who today is head of the Scotch Whisky Association.

“About 40 percent of what we export goes to Europe. If we leave the European Union then we are going to see administrative barriers brought up. If there is a BREXIT we will lose access to the European Union Free Trade Agreements, that is clear. If the UK then will need to renegotiate its own agreements, clearly that is going to take time. Our interest is to be part of the biggest possible market with the fewest possible barriers. The European single market gives us that. The European free trade agreements gives us that. Why we would want to depart from that?” says Frost.

Rats and violence – until a few years ago that was everyday’s reality in this part of Glasgow – called “The Gorbals”. Already by the late 19th century this over-populated area became known as a dangerous slum. Urbanisation projects in the 60s and 70s failed to bring a change.

Today the high-risers are demolished one by one. Rubble is all that remains of “Norfolk Court”, a 24-storey building blown up just a few days ago.

Cathrin and Michael invite us in: they have four children on a modest income. They remember the problems of the recent past.

“You can not have 200 families in one building and when your children grow up in a building with around THEM a culture of drugs and alcohol and gang fights it is too easy for them to become involved in that,” sighs Cathrin.

“It is far more beneficial: European Union money helps fund the regeneration of this area, so I mean that’s only a good thing,” agrees Michael.

The right side of history

Cathrin has a grand-father from Belgium, one great-grandfather from France, and another from Germany. Somehow the family also has some Irish roots. So what does Cathrin think about Europe, especially as it seems to have found its way into the heart of her family?

“We do not see ourselves just as Scottish because we were born in Scotland – we are European. That makes me very proud to be European.”

Michael Kelly, a resident of the Gorbals all his life, agrees.

“I think it would be rather foolish for the UK to exit from the European Union.”

The European Investment Bank has announced it is investing a further one billion pounds into social housing in the UK, or 1.3 billion euros. This could fund 20 000 new homes.

“Well, a huge help has been the money from the European Investment Bank because it is stable finance for half the usual interest rates. It saved us an awful lot of money. There is an expressed link between Europe’s determination to support poorer communities and what that we do and the money that we get from institutions like the European Investment Bank. There is an absolutely clear link, and hopefully that will be maintained, because without it I do not know from where we could get that kind of finance in the future,” says the boss of the New Gorbals Housing Association Fraser Stewart.

Euronews ends its roadtrip where we started it, at the Highland Games in Gordon Castle, way up north. It is time for the “caber toss”, or throwing tree trunks. The future of Europe lies in the hands of the Scots: they could swing the UK’s “Brexit” vote. What could be a better illustration of the modern Europe of free movement and neutered nationalism? The winner of the competition and now officially Scotland’s strongest man was Lukasz Wenta, from Poland.