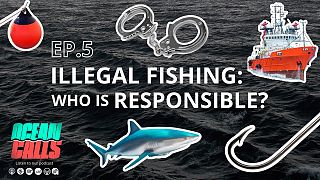 Illegal fishing is associated with devastating economic damage, loss of biodiversity, slavery at sea and human rights violations. But while it is a serious criminal offence, it is almost impossible to regulate.

“The products we buy, it's really hard to know whether you're getting a legal or an illegal one”, says investigative journalist Ian Urbina in this episode of Ocean Calls.

For his New York Times bestseller, The Outlaw Ocean Urbina went on fishing boats around the world, witnessing and recording lawlessness in areas beyond national jurisdiction.

“There's very few police actually enforcing most of these rules on the high seas”, he asserts.

“This realm and this kind of product are unusually illicit and difficult to govern. More so than on online black markets”.

Listen to our episode:

Which fish is illegal?

Between 20 and 50 per cent of global fish catch is either illegally caught, mislabeled, never reported, or from a fishery without a management regime, estimates the ocean conservation NGO Sea Shepherd. Profits from illegal, unregulated, and unreported fishing (IUU) are estimated to be between $15.5 and $36.4 billion a year.

According to the second guest of our episode of Ocean Calls, Dr Daniel Pauly from the Sea Around Us research initiative at the University of British Columbia, the shocking numbers come from the vague definitions and policies in place.

He gives an example of shark finning, a cruel practice during which fishers cut off sharks’ fins - a delicacy in some Asian cultures - and throw the dying animal back into the water.

This procedure is illegal in many countries, but in some places, sharks are tolerated as bycatch and can be kept on board as long as the fins are attached to them, explains Pauly.

This law is an attempt to reduce the number of sharks caught for their precious fins, but fishermen find brazen ways to store shark bodies on board more efficiently.

"Some people cut the fins off and attach them to the shark with a string because they can be packed better”, Pauly says.

The biggest issue of the overall system is ambiguity, according to Pauly. Ultimately, it is near impossible to tell illegal fish apart from legal catch.

“They get mixed. And when they reach markets in Europe, in North America, you cannot separate them out. That's the problem. The bad actors pollute the world of fishing with their actions and the product”.

What exactly is illegal fishing? Who are the perpetrators? What can we do as consumers? These are just some of the questions we’re discussing in this episode of Ocean Calls. Our guests are renowned scientist Dr Daniel Pauly and Pulitzer Prize winner Ian Urbina.

At the end of the episode, you will hear from aerial photographer George Steinmetz about his time spent on a squid boat in the South Atlantic.

Created in partnership with the European Commission's DG Mare.

Is it too late to save the ocean?