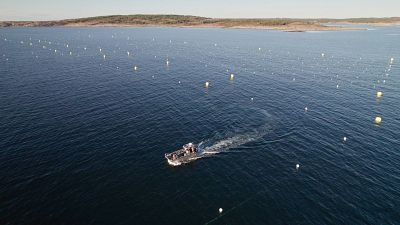 "We see it as a sort of a blue revolution that is coming", says Jonatan Gerrbo, Business Developer at Nordic Seafarm.

This small company grows seaweed along the west coast of Sweden, supplying it frozen or dried to the emerging Scandinavian market.

Farming seaweed species like sugar kelp or sea lettuce can provide more healthy and nutritious food for the planet's growing population, and it could prove to be more environmentally friendly than traditional agriculture.

Reasonably sized seaweed farms have been shown to absorb CO2 and excessive nutrients in the water, helping keep the sea clean and creating new fish habitats. In addition, seaweed farming could be good for the coastal economy: according to the Seaweed for Europe coalition, this industry could create 115 thousand of new jobs by 2030.

"We need to grow seaweed to be able to produce food and other materials in a more sustainable way.

If you look at the farming and food-producing side, we use way too much land and we use too much fresh water. The good thing about seaweed is that we don't use any land at all. The only thing we need is the light of the sun and what's already in the ocean.

People have been eating it in Asia for thousands of years. And the more we use it and the more we make it available for people in Europe, we can sort of get used to eating it and get it into our own kitchens and to our own tradition.

The ocean is almost endless. It's really big, and it's three-dimensional. So it's really space-efficient to use that to grow food. It's getting better and better with the regulations and the permits and stuff to be able to grow seaweed in a large scale. And within the coming years, hopefully there will be there will be farms all over the Swedish coast and around the coasts of Europe as well.

I can see that from a rising demand in different areas, not just food and bioplastics and and stuff, but also in cosmetics, nutritions, and whatnot. So it's a wide range of different application areas. And at some point, there's going to be a complete seaweed section in the in the stores. And it's going to be easy for the customer to choose from, from different products, for different dishes and stuff and just to go home and and cook it in your kitchen. So it's going to be more and more common, I guess, the coming years as well."