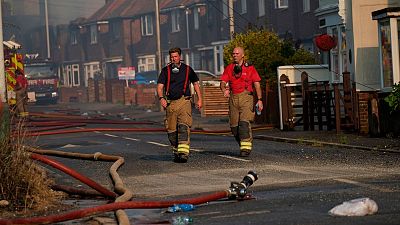 ‘London’s burning’ has been the incredulous watchword of the last 24 hours, as an unprecedented heatwave set homes alight.

Tuesday’s destruction was widespread, with fire and rescue services dealing with 15 major incidents across England and Wales, from the Peak District hills to the capital suburbs as temperatures topped 40C for the first time.

Deadlier wildfires have spread on the continent in recent days and weeks, in Spain, Portugal, France and Greece. But the UK’s experience is shocking nonetheless; the London Fire Brigade’s “busiest day since WW2”, in the words of mayor Sadiq Khan, has exposed how ill-equipped the nation is for the furnace of climate-fuelled wildfires.

It comes amid an industrial dispute. On Monday the Fire Brigades Union (FBU) announced it is rejecting an “insulting” 2 per cent pay increase from the government during the cost of living crisis, and continues to push back against measures which could compromise safety conditions.

"Firefighters are at the forefront of the climate emergency,” says FBU general secretary Matt Wrack. “The demands of the job are increasing but our resources have been under attack by government cuts for over a decade. 11,500 firefighter jobs have been slashed since 2010.”

“It’s hard to put into words the conditions that firefighters were faced with yesterday,” FBU National Officer Riccardo la Torre tells Euronews Green. “The size and the heat of these fires and the speed at which they spread out… the noise as well. They can be so loud.”

The size and the heat of these fires and the speed at which they spread out… the noise as well. They can be so loud.

Firefighters around the country are processing what they experienced. “What the hell just happened?” Dave Walton, Deputy Chief Fire Officer at West Yorkshire Fire and Rescue said to his partner (a 999 Fire Control Supervisor) when they got off shift last night.

Online, he described “a completely and fundamentally different operating environment where fires burn with such ferocity, and spread with such speed in suburban areas that you CAN’T STOP THEM.”

“We’re going to hear a lot of politicians over the next few days use words like ‘unprecedented’ and ‘once-in-a-lifetime’,” predicts la Torre, who served for 18 years with the Essex brigade. And it's just not the case,” he says, pointing to the science on climate change leading to fiercer, longer, more frequent wildfires and flooding.

A number of firefighters have been hospitalised with burns, smoke inhalation and heat exhaustion over the last couple of days. Injuries the public might expect come with the territory, says la Torre. But earlier this month the WHO raised the category of firefighting to a group one “carcinogenic to humans” job.

The more time they have to spend tackling intense blazes, the greater the long term health risk too.

Are firefighters valued enough in the UK?

The climate crisis and the under-resourcing of fire services are a “recipe for disaster”, says la Torre.

Yesterday there were reports of firefighters not being able to get to their radios, to send messages for assistance. Some of those who did send messages were simply told there was no back-up available. In London alone, the FBU officer claims 39 fire engines were unusable due to a lack of workers.

Firefighters leave the frontline of a climate crisis just to go home to a cost of living crisis.

On top of understaffing issues, the union says firefighters’ real pay has been cut by 12 per cent, so the 2 per cent pay offer is unacceptable. “Firefighters leave the frontline of a climate crisis just to go home to a cost of living crisis,” adds la Torre. “We are being treated horrifically at the moment. Yet yesterday we saw the worth of firefighters to society.”

A UK Home Office spokesperson says, “The government is committed to ensuring fire services have the resources they need to keep us safe, including from wildfires, and overall fire and rescue authorities will receive around £2.5 billion in 2022/23.

“Decisions on how their resources are best deployed to meet their core functions are a matter for each fire and rescue authority.”

The government did not clarify how much has been spent on fire and rescue services over the previous several years.