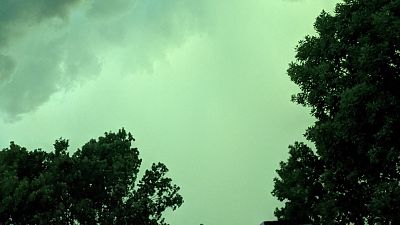 The skies above South Dakota, US turned green on Tuesday (5 July) as a particularly strong storm rolled in.

Eerie images appeared on social media showing the peculiar colour of the sky over Sioux Falls, South Dakota just before a thunderstorm swept through the area.

The National Weather Service confirmed that a ‘derecho storm’ barreled through much of South Dakota, Minnesota and Iowa, leaving nearly 30,000 people without power for hours.

Storms qualify as derechos when they have sustained winds of at least 93 km/h and leave a path of damage at least 400 km long, according to the National Weather Service. This particular storm reached a wind speed of 159 km/h.

While residents in South Dakota have grown used to derechos having recently experienced two such storms, the green sky was a highly unusual sight.

What caused the sky to turn green?

It’s not fully understood why green skies occur, but most scientists point to the liquid water content in the air as a root cause.

The celestial phenomenon occurs when clouds carry a lot of water and allow primarily blue light to pass through the storm cloud.

The blue light mixes with the sun's red light, and the sky turns green.

Watch the video above to see skies turn green over South Dakota.