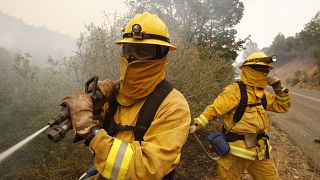 Firefighters in San Francisco, US.   -   Copyright  Michael Maloney/San Francisco Chronicle
The opinions expressed in this article are those of the author and do not represent in any way the editorial position of Euronews.
By Susan Gardner  •  Updated: 15/03/2022

Susan Gardner is the Director of the Ecosystem Division at the UN Environment Programme (UNEP). Here she explains why wildfires are scorching so many nations and what we can do to prevent them.

Fire has always been with us. According to Greek myth, Prometheus first stole fire from Mount Olympus and gave it to humans.

He was punished for it, but to us, it’s been a gift, not only celebrated on religious holidays, but without fire human development would have been curtailed some 1.8 million years ago as it was through the ability to cook food, that humankind was then able to leave the cave.

But rather than a cause for celebration, fires today are emerging as a major threat. A recent UN report projects that wildfires will become more frequent and intense throughout the coming decades. The long-term prospects are terrifying: a likely increase of 30 per cent of global extreme fires by the middle of this century.

To put that forecast into perspective, recall the experiences of the last three years.

Australian bushfires wiped out 3 billion domesticated and wild animals, wildfires scorched 4 percent of California and were the worst in its recorded history, and Russian wildfires engulfed an area of 200,000 square kilometres – an area about 80 times the size of Moscow.

Landscapes that have been burning in the past will burn even more, from the Arctic tundra to Indonesia’s rainforest. Regions previously unaffected by wildfires, including Siberia or Canada’s forests, could experience untold consequences.

The toll wildfires take on both the environment and human health

It is hard to exaggerate the toll that even more wildfires would have on human health, the environment, and the economy. Currently, their impact extends for days, weeks and sometimes even years after the flames subside - and the financial costs are phenomenal.

Inhaling wildfire smoke causes death, respiratory and cardiovascular problems, and anxiety, especially among the most vulnerable in society. The legacy of pollutants, carried by wildfire smoke, lead to ongoing damage to biodiversity and the further degradation of air and water quality, as well as the erosion of fertile soils.

They pose a threat to the agriculture sector, to insurance companies and food security, while also imposing costs on fire suppression and resettlement of evacuated communities. Finally, rebuilding after wildfires can entail staggering costs for any country, but for low-income ones it can spell a setback for fighting poverty and achieving other sustainable development goals.

Although fires occur naturally and can contribute to the rejuvenation of the earth, the proliferation of wildfires is a risk that directly stems from human actions. These include harmful land-use changes through deforestation and forest degradation, agricultural activities and livestock grazing, urbanisation, and population growth. As well as greenhouse gas emissions that make drier seasons, droughts, extreme heat, and lightning storms more likely.

What is the link between wildfires and climate change?

The link between wildfires and climate change is particularly alarming, since they are mutually exacerbating: as wildfires expand and emissions grow, we might be facing infernal feedback loops that turn landscapes into tinderboxes. We saw in 2015 that Indonesia held the mantle of the greatest carbon emitter in the world, as a result of wildfires.

Indonesia has since taken action and is now investing more in fire prevention and preparedness, which the UN also advocates for.

As wildfires expand and emissions grow, we might be facing infernal feedback loops that turn landscapes into tinderboxes.

Curbing emissions and improving land-use management would certainly be crucial to avoid the worst scenarios in the 21st century, including wildfires. Yet even if we do so dramatically, that will not eliminate the risk of fires.

While it sends a strong signal to nervous citizens, often sending in firefighters to extinguish a wildfire is very expensive and seldom effective. Brave teams struggle fiercely – but often helplessly – when tasked with suppressing a fire that is already raging.

In other words, turning on the fire hoses and dropping water from helicopters are signs of policy failure rather than hope.

Decision makers will ultimately need to reevaluate their investments addressing wildfires. Currently, reactive responses to wildfires typically receive over half of related expenditures, while planning and prevention receive less than 1 per cent of governments’ focus. This has to change, as the current investment isn’t working.

This is why we need a new Fire Ready Formula which allocates only one-third of available resources to direct-response - and devotes much more to planning, prevention, preparedness, and recovery.

Such investments must engage local communities and Indigenous communities on the frontline, who can play a critical role by sharing knowledge and practice that can beat it back.

Portugal can show us what is possible.

Portugal can show us what is possible. The impact of the 2018 fires saw 200,000 hectares of land burn in just 24 hours. This led them to overhaul their wildfires approach with prevention and local investment at its heart and so far, it seems to be working.

UN bodies need to rethink how we respond to this challenge and build a new global initiative for action for this as this is an issue where the fire is outstripping our ability to respond.

There is a global appetite to do better and to ensure that the gift of Prometheus does not become the curse of our century.

A recent commitment by the US government of $50 (€45.5) billion to stave off catastrophic wildfires is one encouraging step. But there is a burning need to consider international measures to mitigate climate change, rethink land-use management, and prioritise prevention over direct-response to wildfires.

More evacuations expected near dangerous wildfires in US Southwest