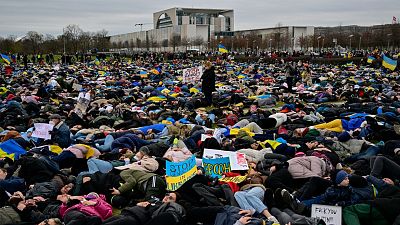 Pro-Ukrainian activists stage a "Die-in" during a protest under the slogan "Stop promising, start acting!" to call for an embargo on oil, gas and coal imports from Russia.   -   Copyright  AFP
By Maeve Campbell  with Reuters  •  Updated: 08/04/2022

The EU is planning to approve a total ban on Russian coal that would take effect from mid-August 2022 - but it's a month later than initially planned.

The decision came after pressure was applied by Germany to delay the measure.

The phase-out of EU imports of Russian coal is the cornerstone measure in a fifth package of sanctions against Russia that the EU Commission proposed this week, as a reaction to civilian killings in the Ukrainian town of Bucha.

Once approved, it will be the EU's first ban on any import of energy from Russia since the start of what the Kremlin calls its "special military operation" in Ukraine on 24 February.

But coal is the dirtiest fossil fuel, responsible for over 0.3C of the 1C increase in global average temperatures. This makes it the single largest source of global temperature rise. We need an uptake in renewable energy if we are going to tackle the climate crisis.

The EU Commission had initially proposed a wind-down period of three months for existing contracts, meaning that Russia could effectively still export coal to the EU for 90 days after sanctions were imposed, according to a document seen by Reuters.

But that period has been extended to four months, the sources who are familiar with the discussions told Reuters on condition of anonymity.

That followed pressure mostly from Germany, the EU's main importer of Russian coal.

With sanctions expected to take effect later this week, or early next, after publication in the EU official journal, Russian companies will effectively be able to export coal to the EU until mid-August under existing contracts.

Diplomats held two meetings on Thursday to sort out other technical issues, including the enforcement of an entry ban for Russian vessels at EU ports, which has caused concerns mostly in countries with big shipping sectors, such as Cyprus, sources said. However, approval of the whole package was not in doubt.

One diplomat said most coal contracts were short term, and a wind-down period of 90 days would have allowed most of them to be concluded without the need for cancellation, avoiding legal risks.

However, some contracts last longer than one year.

Much of Europe's buying of Russian coal is in the spot market, rather than long-term contracts. The spot market is a public financial market in which commodities are traded for immediate delivery, compared with the futures market, where delivery is due at a later date.

Those spot purchases would be halted immediately after sanctions are imposed.

Despite being slightly watered down from the initial proposal, the EU's planned ban on Russian coal is more ambitious than Britain's, which has said it planned to ban coal imports from Russia by the end of the year.

The EU's planned ban on Russian coal is more ambitious than Britain's, which planned to ban coal imports from Russia by the end of the year.

The EU Commission has estimated the coal ban could cost Russia 4 billion euros a year in lost revenue. The Commission declined to comment.

The EU ban is expected to boost global imports of non-Russian coal, with prices potentially going up, although non-EU importers may benefit from lower prices for Russian coal.