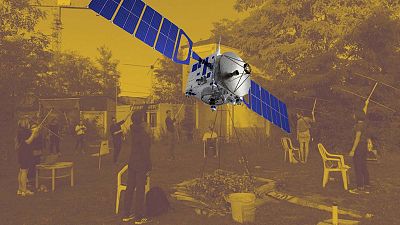 We are living in a very momentous moment in the history of humanity, our planet, and life as we know it.

And yet, we often miss the bigger picture. As our daily life is gradually transformed by climate change, we might notice violent storms, unprecedented flooding and extreme heat but miss the bigger changes.

Melting ice caps, sea level rises and coastal erosion are often slower and much larger in size than our eyes can comprehend.

And yet - there's now a way for each of us to document the biggest story of our time.

Designer and researcher Sophie Dyer and geographer and activist Sasha Engelmann have created a platform, called open-weather. The platform is designed to empower people to document climate change through satellite images, using tools that are normally only available to big research bodies and institutions.

"We started the project in early 2020 out of a desire to open DIY satellite image decoding to nonspecialists," explains Engelmann.

"We had both learned how to capture satellite images through a limited set of online how-to guides pitched toward radio amateurs (citizens with licenses to experiment on the radio spectrum) and engineers.

"We observed that there were no accessible and inclusive guides on this practice. Our ‘DIY Satellite Ground Station Guide’ on Public Lab, published in June 2020, was our attempt to enable anyone, without radio or engineering experience, to set up their own DIY satellite ground station," she adds.

The big revelation about satellite images is that anyone can technically receive public data broadcasts of National Oceanic and Atmospheric Administration (NOAA) satellites. You just need the right instruments.

All you need is a basic V-shaped antenna, which can easily be found in an electronic shop or online. Then you need a dongle, a small computer device that looks a lot like a USB stick (but it isn't).

At this point, you can download one of the many free software programmes which allow you to navigate the radio spectrum and read any signals you might receive, like CubicSDR.

"Two people working together can normally set up their own ground station in about a day, or a couple afternoons," says Engelmann. "However we recognise that there are still barriers to access - for example places in the world where it is more difficult to order and receive the technical equipment, as well as language barriers (most of our work so far has been in English)."

The cost of all of this should be around 60 euros.

Couldn't resist sneaking out to catch #StormEunice this morning with my satellite pal @sashacakes#openweather#diysatellitegroundstationpic.twitter.com/THLnIK9Zaf

What do I do with all this stuff?

With only these three tools, you’ll be able to launch your own DIY satellite ground station.

You can start by using a free online tool to track satellite orbits in the sky (here's an example, but you can find several on Google), then find a place outdoors where you can clearly see the sky above you. Next, connect your V-shaped antenna to your laptop using the dongle and tune it to a frequency indicated by the software.

The arms of your antenna must be parallel to the ground and the tip must point north.

How do I get the satellite images?

The antenna will capture the satellite’s unique radio transmissions and send them to your laptop, which will then decode that sound into two images. One will have recorded the visible light reflecting on the Earth’s surface, while the other will pick up the infrared radiation emitted by the land, sea and clouds.

Each satellite image will be unique, as the image will slightly change according to the position of the antenna and even that of your body.

Chasing the heavy weather and howling winds of #StormEunice today with @sophiecdyer#openweatherpic.twitter.com/6rujNl2MP8

What is it even for?

The climate crisis can be overwhelming, and it can make you feel powerless. Documenting it yourself can help you come to terms with what is happening and keep track of the emergency and its impact.

Most importantly, we know that climate change is not affecting the entire world in the same way. While one part of the world may be battered by devastating winter storms, another part may be suffering a long, unexpected drought. Recording that reality can help create a map of the impact of climate change and gather evidence of what we are collectively, and individually, experiencing.

The experience of anyone on the globe witnessing climate change counts. The community of Earth-watchers around the world is growing, and so is the scrutiny on politicians’ policies and the calls for them to act against climate change.

"We were surprised at the number of people who replicated the guide in places like Buenos Aires, Mumbai and Seattle," says Engelmann. "In September 2020 we also began organising global 'nowcasts' where members around the world contribute their own DIY image captures on a specific day to build collective images of the planet, and leading DIY Satellite Ground Station workshops, which further grew the network."

At present, open-weather has over 60 members around the world.

But while people wait for the political class to act, they’re taking matters into their own hands - starting from a small antenna.