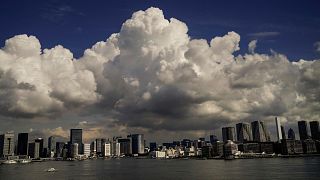 The planet’s warming climate could intensify ‘rivers in the sky’ over East Asia, scientists have warned.

Atmospheric rivers are long, narrow columns of water vapour flowing through the sky that pick up moisture from warm areas then deposit it in colder regions. When they hit a barrier like a mountain range, it can lead to extreme levels of rain or snowfall.

This weather phenomenon is thought to contribute around 20 per cent of the Earth’s total water flow.

But, with vast quantities of water being released in a short space of time, they can also cause potentially catastrophic flooding. Wind and temperature control their movements too - both factors that are influenced by climate change.

While there has been a lot of research into atmospheric rivers, it isn’t entirely clear what our changing climate will do to them. But meteorologists say that, with more frequent extreme weather having a severe impact on society, understanding how they will be affected is vital.

To find out, scientists at the University of Tsukuba in Japan ran simulations using nearly 60 years of weather data. Computer models showed that if we see the worst outcomes of climate change, atmospheric rivers would cause record-breaking amounts of precipitation in Japan, Taiwan, northeastern China and the Korean Peninsula.

What about the rest of the world?

Though the data in the research was limited to East Asia, the researchers say that their findings could also apply to other parts of the world. An increase in global temperatures means more moisture in the air with atmospheric rivers becoming larger, more intense and carrying higher volumes of water.

This phenomenon was thought to be responsible for the dramatic flooding seen in British Colombia, Canada late last year. Weather conditions meant that tropical moisture slammed the region with some areas reporting their wettest day in history.

Known as the ‘Pineapple Express,’ this particular river in the sky carries warm water vapour from Hawaii to the west coast of the US.

These regions may also experience more frequent and intense extreme precipitation events as the climate warms.

“Our findings are likely also applicable to other regions of the mid-latitudes where interactions between atmospheric rivers and steep mountains play a major role in precipitation, such as in western North America and Europe,” says lead author Professor Yoichi Kamae.

“These regions may also experience more frequent and intense extreme precipitation events as the climate warms.”