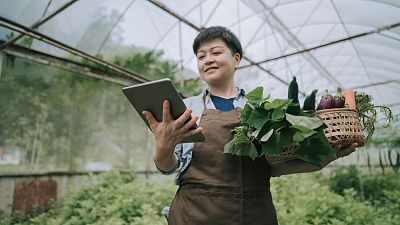 Workers of the world are greening their CVs, but not as fast as environmental jobs are opening, according to the first ever LinkedIn report on the state of the green economy.

‘Green talent’ - which the employment platform defines as members working in relevant jobs, or advertising their green skills - has grown by around 6 per cent every year since 2015, while green job postings increased by 8 per cent.

This shift towards sustainable careers is happening in parallel with what LinkedIn calls the ‘Great Reshuffle’ - a historic transformation in how, where and why people work.

“Achieving our collective global climate targets is a monumental task and it is going to take a whole-of-economy effort to make it happen,” says Sue Duke, LinkedIn’s head of global public policy.

Despite the share of green talent among the platform’s 800 million profiles growing by almost 40 per cent over the last six years, according to Duke, we are still a long way off the level of skills or jobs required to meet Europe’s aims.

And worrying gaps are emerging within this wider lag - including a serious gender one. In 2021, there were 62 women for every 100 men considered green talent, no improvement from 2015 figures.

The report has important policy implications for how we upskill workers and train future generations, adds Duke. Here are some of the key takeaways from the inaugural survey.

Where are there signs of green growth, according to LinkedIn?

Wind turbine technician and solar consultant are some of the fastest growing green jobs of the future, the report finds.

Unsurprisingly, the energy sector is undergoing one of the biggest transitions in workforce terms. In the US, renewable energy jobs soared by 237 per cent in the last five years, in contrast to a 19 per cent rise in oil and gas jobs. At this pace, LinkedIn predicts the former will outpace fossil fuel roles by 2023.

In manufacturing, the European car industry is also seeing a surge in green talent, up by more than 11 per cent year on year as the electric vehicle industry booms.

‘Sustainable fashion’ was the fastest-growing green skill globally, with an average growth rate of nearly 91 per cent between 2016 to 2020. It appears that traditional fashion jobs - such as fashion designers, retailers and stylists - are increasingly applying sustainable fashion skills to their business models.

It’s no doubt got trendier to show off your sustainable credentials, but hopefully it reflects real-world know-how too, as the label is also spreading into other industries - from media to non-profits and IT services.

Sustainability Manager was the fastest growing green role overall at 30 per cent, with wind and solar positions up by 24 per cent and 23 per cent respectively.

But the green sea-change is not only happening in core sustainability areas like ecosystem management, environmental policy and pollution prevention, Duke writes in Politico. “In fact, the vast majority of green skills are being used in jobs outside the traditional green sphere - jobs like fleet manager, data scientist and health care worker.”

Who is benefiting from the green transition, and how can we close the gaps?

Green jobs are only getting more numerous, but the report reveals some concerning trends in who is qualifying for them. “Our data shows that we have inequities persisting not only between countries but also along gender, demographic and educational lines,” the authors say.

This is a major stumbling block to the global ‘just transition’. Green talent grew by only 18 per cent in low-income countries between 2015 and 2021, compared to 39 per cent in high-income nations. Worse, the relative green talent hiring rate (LinkedIn’s way of comparing successful green job searches compared to its total hiring rate) has been decelerating in low-income countries like Bangladesh since 2020.

These are, of course, the countries that have contributed least to climate change - and they now risk getting left behind as richer countries upskill themselves in green industries designed to fix the crisis.

Analysing the green economy by gender, LinkedIn found that the share of female green talent has grown since 2015, but it still lags behind male green talent. Over the last six years, 66 per cent of transitions into green jobs have been made by men.

Cyprus, Malta, Ireland and the Netherlands are among the European countries closing this gender gap the fastest.

Cyprus, Malta, Ireland and the Netherlands are among the European countries closing this gender gap the fastest.

While work is needed to prevent older, experienced professionals being left behind, it’s more encouraging to note that the green skillsets of younger people - millennials especially - are growing quickest.

“LinkedIn’s Global Green Skills Report provides actionable insights that can be a catalyst for the jobs and skill transformations, which are vital for building the next generation of green talent,” adds Duke.

“We applaud EU Commissioner Mariya Gabriel’s work to put green skills on the top of the agenda, and LinkedIn will play our part to realise the EU’s ambition to provide Europe’s youth with a clean and green future.”