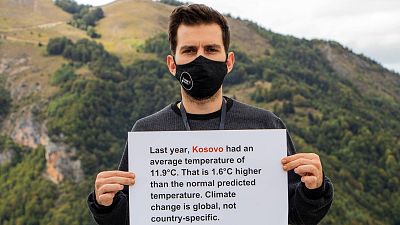 Euronews Green is proud to be partnering with Youth and Environment Europe over the next several months to platform underrepresented and marginalised people in the climate movement. In this instalment, we introduce Guxim Klinaku.

Guxim is an environmental activist from Kosovo who studied film directing. Since 2016 he has been fully involved in the environmental movement. In his article, he details how he is fighting for a sustainable future for his country.

I live in one of the most air-polluted cities in Europe. Obiliq is a small town of around 6000 inhabitants. It is also a town with two power plants that provide 97 per of electricity for Kosovo.

These power plants provide jobs for the people in the region, but at the same time, they make them sick. Around one-third of local people suffer from a respiratory disease.

The power plants also cause acoustic, water and soil pollution, and emit huge amounts of carbon dioxide to the atmosphere.

This is why me and my friends decided to start a non-profit organisation. We founded Keep It Green in 2016 and since then we have empowered hundreds of young people to become involved in environmental issues and organised protests against pollution in Obiliq.

We also want to increase the pressure on institutions for the implementation of environmental laws in Kosovo. 2022 is the year when the institutions in our country must start to act, otherwise, we will be late.

We all need sustainable development to secure our future. However, the energy transition in Kosovo must take into account the livelihoods of the people and the financial dependency on these power plants.

Everybody has something to offer

People must start training for green jobs now, and we must not leave anybody behind. Climate justice is very important, especially in those countries where climate change will change industrial development and energy production.

I believe that the climate movement is a social one at its core. So, to radically change the situation, everybody has to be involved.

At Keep It Green, we work with young people because we believe that this is one of the most effective ways to spread the message of environmental protection. They are a great motivation to me, too. I can see how impactful our activities are on their thinking. Young people have been the engine of social change. But it is also a huge responsibility because they are the leaders of tomorrow.

I also tell them to start small, never stop, but improve consistently. Only consistency can bring results. And when it gets hard, look at your progress.

When you look at it from a distance, you will see how much you have grown over time. With goodwill, work and commitment, any goal can be reached.

Meet the Czech climate activist fighting for her family in Sudan