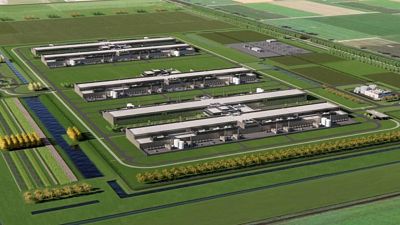 A new Facebook data centre in a small Dutch town may soon be using two times more energy annually than the whole town put together.

The social media giant, now known as Meta, has provoked criticism from environmental groups in the country amid fears the data centre could make the Netherlands miss its climate goals.

The plans for the 166 hectare site were voted through in December by the municipality's council, which could pave the way for Meta to build the centre in Zeewolde, near Amsterdam.

How much energy will the data centre use?

The proposed centre - which will serve Meta’s social media platforms including Instagram, WhatsApp and Facebook - will use an estimated 1,380 gigawatt hours of energy per year.

Meta has stipulated that the energy can only come from renewable sources, but the centre will still require an estimated 10 per cent of the country’s current wind energy production.

The centre will require an estimated 10 per cent of the country’s current wind energy production.

Alongside energy concerns, the data centre will also be built on fertile agricultural land, turning an area of green space grey.

“We are also committed to supporting all of our operations with 100 per cent renewable energy and will work with stakeholders to bring new renewables to the grid if we decide to move forward with this investment.”

How will the proposed data centre affect Zeewolde?

Zeewolde, 50 kilometres east of Amsterdam, has 22,000 residents but the estimated energy the data centre will consume will be equal to a city of 460,000 people.

Meta has stated that the proposed data centre will provide an estimated 400 permanent jobs in the local area and around 1,000 temporary jobs during the construction phase.

If the plans go ahead, five data halls are expected to be built on the former farmland in the province of Flevoland. This would make the site the largest data centre in the Netherlands.

Is the Netherlands on track to meet its climate goals?

PBL, the Netherlands Environmental Assessment Agency told Reuters in October that although CO2 emissions will be 38 to 48 per cent lower in 2030 than in 1990, this is still well short of the EU goal of reducing emissions by 55 per cent by the end of the decade.