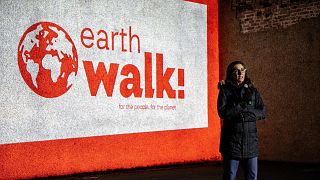 Nicole Stott at EarthWalk Live in Glasgow.   -   Copyright  ActionAid
The opinions expressed in this article are those of the author and do not represent in any way the editorial position of Euronews.
By Marthe de Ferrer  •  Updated: 05/11/2021

Throughout COP26, we’re profiling some interesting people we meet here in Glasgow.

From volunteers to politicians to activists to scientists, we’ll bring you the breadth of people here at the UN climate summit.

Why is environmentalism important to you?

I had the chance to fly in space, to live and work on the International Space Station for over three months.

Although I will say it doesn't take three months for you to realise this, that first view out the window is incredible - even though you know it's going to be overwhelmingly beautiful. I think there's something about seeing Earth as a planet that's your home from space and recognising the fragile nature of our atmosphere that blankets the planet.

There's nothing more compelling than that when it comes to understanding the interconnectivity of it all. Understanding we all are in space together and the fact that really, truly we need to start behaving like crewmates not passengers on spaceship Earth.

I'm really excited about the opportunity to speak with people like you who are reaching out and participating in events like this. Where all kinds of different people are coming together sharing their experiences, hoping that there'll be a network where they can look to each other for support.

We brought our art spacesuit 'Beyond' to the display that ActionAid has in the Science Centre. It's part of this really beautiful complement of imagery, and not just still images, but virtual reality to transport people to some of these places where some of the most significant impacts are happening from climate change.

To have the suit Beyond as this ambassador for Spaceship Earth, communicating this connection between personal and planetary health, and to be built from artwork from kids all over the planet.

What do you think we can learn from space travel?

Well, I think it's unlimited. I mean, from the time over 50 years ago, when we started going to space, part of what we were looking at doing is how do we better understand our own planet.

That could be sending robotic probes off to other planets and then discovering how we relate to them. But if you think about it, over 50 per cent of the information of the data we need to solve our planetary challenges, like climate change, comes to us from space-based systems.

On the space station, there are those kinds of instruments orbiting our Earth every day and it's like they're able to measure the pulse of our planet. We can watch our planet breathe through the information that we're getting back. And it's the critical information that we need to solve our problems.

What are your thoughts on private space travel from billionaires like Jeff Bezos?

I'm honestly for it, myself. I think that Jeff Bezos probably was amplifying something that he already felt that he already understood about our place here on this planet.

His philosophy, which doesn't get communicated all that well sometimes, is really and truly ultimately about lifting the industrial kinds of things that are happening on Earth, off the Earth into the benign environment of space.

So I mean, I think about things like space-based solar power. The solution that that could give our planet a massive reduction in emissions. It would take some time, but steps are being taken as people fly these suborbital flights and come back impacted.

Think about Shatner, he's an actor, he's good, but he's not that good. That was an honest portrayal of what this man experienced, you know, looking out the window. And I think he already felt that way too.

What would a successful COP26 look like for you?

I would love it if we could have all of the leaders that are around a table, in whatever city they are in, to could get into that place in space. If we could have them floating around with their little heads bouncing off each other looking at Earth as the backdrop.

I think they would be compelled to really put into action the things that are necessary that we have the power to do to create a future for all life and on Earth, that's as beautiful as it looks from space.

Watch the video above to hear more of Nicole's thoughts on space and the environment.