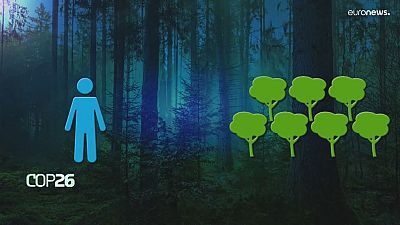 If we're going to slow down global warming scientists say we're actually going to have to take billions of tonnes of CO2 out of the atmosphere.

So how do we do it? Plant trees or use machines?

There’s a sci-fi-looking plant that is working away right now, literally sucking CO2 out of the atmosphere.

It's from a Swiss company called ClimeWorks and it's located in Iceland.

The machines use renewable geothermal energy, and the CO2 is pumped underground and eventually becomes rock:

This new technology is expensive.

The demonstration plant cost 10 million euros to build and can capture 4,000 tonnes of CO2 per year.

In any case, it's pricey technology at the moment, but it has lots of political and business support, and once scaled up the price could drop to 150 euros a tonne.

But you really need a lot of them to compensate for our emissions.

When we have exhausted all emission reduction and fixation options, trees are a great ally.

An average tree contains about a tonne of CO2, and the average European emits 5 to 7 tonnes of CO2 per year.

So you'd need to plant 5-7 trees every year from now onwards for the rest of your life to offset your emissions.

Do we even have enough land for those trees? Not really, not if we want to grow food, too.

In fact those that promote responsible forestry say planting trees has to be seen as a kind of top-up option once the reduction of emissions has been maximized.

“When we have exhausted all emission reduction and fixation options, trees are a great ally,” says Diego Florian from FSC Italia.

So we need both trees and machines, but most of all reduced energy demand and a switch to clean power.

How fire, ice and soot impact our climate

Just how hot is too hot for human beings?