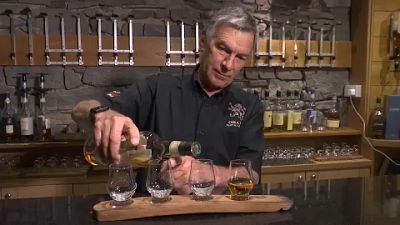 As world leaders gather in Glasgow for the COP26 climate conference, many will be sampling a dram or two of Scotland’s famous whiskies.

And they may even take note of how the industry is leading the way to create a carbon-neutral future.

One of Scotland’s most prestigious whisky makers, Oban, has been looking at ways of reducing its carbon footprint in the whisky-making process.

In 2018, the distillery switched from using fossil fuels to a rapeseed oil biofuel, reducing the distillery's carbon footprint by 98 per cent.

"It's given us a transition fuel to be carbon neutral quicker. We have been carbon neutral now since late 2020. It's allowing us to make that transition step towards zero carbon," says Callum Rew, the senior site manager of Oban Distillery.

"And biofuel was new on the market, so we thought we'll try it, we'll test it, it's a very relatively small distillery here at Oban, so it's maybe easier to try and integrate it here first."

Does making whiskey harm the environment?

Whisky making can be taxing on the environment. A huge amount of energy is required to extract the sugars out of the grain in the mashing process before even taking into account transporting the products all around the world.

But the industry has been taking steps to lower the environmental impact.

According to the Scotch Whisky Association, since 2009, there has been a 34 per cent reduction in greenhouse gas emissions.

A huge amount of energy is required to extract the sugars out of the grain in the mashing processs.

Karen Betts, chief executive of the associations laid out the industry's plans: "It's really important to us that we are sustainable both now and into the future. We think that through collaboration, innovation, investment, ingenuity, and a bit of time, we can get there by 2040. And if we can get there by 2040, we absolutely should."

On the western edge of the Scottish highlands, Ardnamurchan Distillery has been using sustainable energy sources since its opening in July 2014.

Shift leader in the distillery, Scott Stewart, says that Scotch whisky's new green credentials will give it recognition all over the world.

"It's what the country is famous for, it's so famous for its whisky. So, if we can show that one of our major exports, or biggest export, is being as green as possible and as sustainable as possible and environmentally conscious, then it reflects fantastically on the whole country. And it can be an example to other industries to follow."

It is estimated the Scottish whisky production is worth around €6.5 billion to the British exchequer and, with a little Dutch courage, the industry is aiming to reach net-zero emissions in its operations by 2040, ten years ahead of the British government's 2050 target.