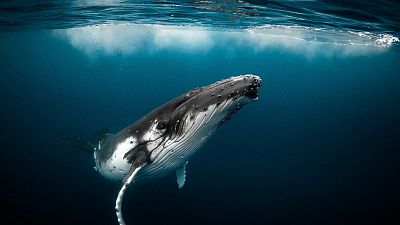 There’s no doubt that whales are one of the most extraordinary animals on our planet, but did you know that they’re also helping to lighten the load of climate change?

We tend to think of trees as doing the bulk of natural work to absorb CO2 from the atmosphere. While that’s certainly true on land, under the sea these titans of the ocean are playing a huge role.

Whales store large amounts of carbon in their bodies, and when they die they take it to the bottom of the ocean floor. Known as ‘whale falls’, these sinking carcasses ensure that the carbon is trapped in the deep sea rather than being released in surface waters.

Whales are doing the lion’s share of carbon storage undersea

New research at marine sanctuaries off San Francisco has revealed that whale falls represent roughly 60 per cent of annual carbon sequestration (or storage) there. This is greater than the combined efforts of ‘kelp export’ - where seaweed moves carbon loads out to the deep ocean - and the carbon-capturing habitats of seagrass and salt marsh.

In total, the four processes and habitats have the potential to lock away 4,950 megagrams of carbon (MgC) each year - the equivalent of 18,150 metric tonnes of CO2. That’s 140 times the amount of CO2 that is emitted from operations at the sanctuaries, according to the Greater Farallones Association.

The report's authors say their findings are intended to steer managers of Marine Protected Areas towards better conserving these climate-critical resources.

But looking after whales is not something that humans have historically been good at.

The critical case for restoring whale populations to pre-whaling levels

Tens of millions of whales were killed during the thousand-year period of industrial whaling. It culled their populations by anywhere between 66 to 90 per cent in pursuit of meat, oil and other products, a 2014 study found.

Scientists estimate that before whaling began, whale populations (excluding sperm whales, which feed at greater depths) would have sunk up to 1.9 million tonnes of carbon per year.

As if the colossal beauty of whales were not sufficient reason to care for them in life, their use to us in (natural) death makes a compelling and urgent case for restoring their numbers.

And in fact, while still swimming through the great blue, whales provide another valuable climate service with their poo. Their iron-rich faeces stimulates the growth of phytoplankton - tiny marine algae which capture around 40 per cent of all the CO2 produced in the world.

Altogether, the IMF estimates that whales could capture 1.7 billion tonnes of CO2 annually if allowed to return to their pre-whaling numbers.