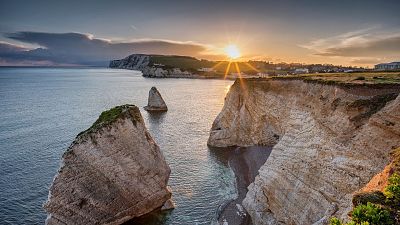 Isle of Wight Council has rejected UK Oil and Gas Investments proposal to drill for oil on the island.

The council voted unanimously to refuse UKOG's application. The oil company had applied to drill two exploratory boreholes near the village of Arreton in the hope of recovering 15.7 million barrels of oil.

The decision brought immediate relief to the campaign group 'Don't Drill the Wight' which has been opposing the plans for the past five years. Euronews Green reported on efforts to stop UKOG's oil drilling plans on the island last year.

The @iwight voted to unanimously REFUSE planning permission for exploratory #FossilFuel wells on the #IsleOfWight.

We are so proud that @iwight chose to stand up for Islanders, our environment & our community.

HUGE thanks to all involved.? pic.twitter.com/eB1cQcpiyM

What was at stake for the island?

The Isle of Wight won UNESCO Biosphere Reserve status in 2019. "There are very few members of the biosphere and we are one of them and we cannot really afford to lose that status," said 'Don't Drill the Wight' campaigner Sylvia May MBE.

The group raised the alarm about UKOG's plan, particularly its impact on the environment and wildlife, calling it "catastrophic". They were also concerned it could affect already limited water supplies on the island.

UKOG previously said the drilling would benefit the economy, and even offered to share some of the profit with local residents, but they were not convinced. "The amount of oil that might be found would be tiny, 13 days worth [to supply the UK]. There is no economic benefit in exploration, " said Jonathan Idle from the Green Party.

Isle of Wight Council spent hours considering the planning application before the final vote, and were presented with thousands of objections from residents, as well as a petition with over 4,000 signatures.

'Don't Drill the Wight' welcomed the decision in a social media post adding that "the fight may not be completely over but it's a huge relief and a major victory to all involved in fighting this application".