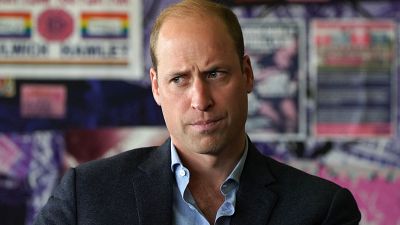 Prince William says saving the Earth should come before searching for life on other planets.   -   Copyright  KIRSTY O'CONNOR/AFP
By Maeve Campbell  •  Updated: 14/10/2021

Saving the Earth is more important than searching for life on other planets, Prince William said publicly in an interview this week.

The prince spoke to the BBC ahead of the first royal Earthshot Prize which will be announced next week. This is a prestigious award for those coming up with solutions which substantially help the environment.

The Duke of Cambridge suggested that we need some of the world’s greatest minds “to repair this planet, not trying to find the next place to go and live".

He references space tourism just days after Hollywood actor William Shatner became the oldest person to go to space. Shatner was shot into space in the Blue Origin sub-orbital capsule created by billionaire and richest person in the world, Jeff Bezos, following in the footsteps of over 500 others so far.

As of July 2021, a total of 574 people from 41 countries have gone to space, according to the FAI criterion.

Prince William criticised the space mission, saying that it “really is quite crucial to be focusing on this [planet] rather than giving up and heading out into space to try and think of solutions for the future."

He also used the interview to praise his father, Prince Charles, who has been outspoken about climate change “very early on, before anyone else thought it was a topic". The Duke of Edinburgh has worked with the World Wildlife Fund (WWF) for many years, raising awareness on nature conservation and the importance of biodiversity.

In his own interview earlier this week, Charles showed solidarity for environmental activists protesting on the streets and also revealed that his prize Aston Martin was powered on wine and cheese biofuel.

William claimed his father has had a "rough ride" when warning about the future of our planet, adding, "it's been a hard road for him."

The rise in climate anxiety

The prince, now a father of three to Prince George, Princess Charlotte and Prince Louis, also expressed concern over the rise in climate anxiety in younger generations.

“Young people now are growing up where their futures are basically being threatened the whole time.”

He added, “it’s very unnerving and it's very, you know, anxiety-making”.

A post shared by Duke and Duchess of Cambridge (@dukeandduchessofcambridge)

William concluded that it was “not fair” to be “robbing from our children's future through what we do now”.

He will be presenting the Earthshot Prize to winners in five categories, who are set to receive £1m to develop their climate solution projects.