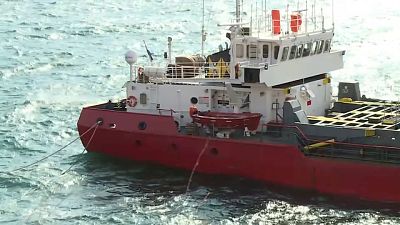 Divers have also been sent to inspect the ship, where it is stranded on the rocks near the Yaylata nature reserve.

The caretaker government in the EU member state has said that the ship is currently in a stable position and that the situation is under control.

But environmentalists have expressed concern for the local ecosystem, given that some of the fertilisers may have been submerged in the water for several days.

The Yaylata nature reserve is home to many protected seabirds and endangered marine species.

"The engine compartment of the cargo ship is flooded, there are holes in the hull of the vessel," said Ventsislav Ivanov, executive director of the Maritime Administration Agency.

"The ship can no longer be saved," he told reporters on Wednesday.

Shipwreck caused by a navigational error

According to early investigations, the Vera SU ran aground due to mistakes by the ship's crew.

The cargo ship was sailing from Ukraine to the Varna port when it became stuck on the Black Sea coast on September 20.

Bulgaria's National Investigation Service, which is in charge of the probe, says the accident was most likely due to the negligent actions of the ship's "watch officer".

"Based on the evidence collected so far, it can be concluded that the watch officer fell asleep for 15 to 20 minutes and missed the recommended point for the vessel to turn a new course," the authority said.

The Vera SU was travelling at around 7 knots at the time of the collision and was severely damaged. None of the nine crew members on board were injured.

The ship's captain and second mate have since been remanded in custody following the incident.

Prosecutors have charged the two with causing an accident, substantial damage to property, and endangering the lives of others.

Attempts to unload the 3,300 tonnes of nitrogen fertiliser cargo from the Vera SU have so far been unsuccessful.

Although weather conditions are improving, environmental concerns have been raised about the delayed rescue operation.

'Irreversible effects' on the ecosystem

NGOs including Greenpeace have expressed anger that the Bulgarian authorities did not act on the shipwreck for several days, due to a dispute with the Vera SU's owner.

"We are outraged by the lack of a clear plan of action, the apparent carelessness, and the delay in the operation," Greenpeace Bulgaria said in a statement.

"If the release of the cargo into seawater continues ... it will inevitably lead to long-lasting and irreversible effects on the ecological balance and ecosystems in the area."

Greenpeace says analysis of the local seawater indicates the presence of pollution. The levels of nitrogen compounds in the water are close to the levels you would expect to see in urban sewers, the NGO said.

"The release into the sea of the 3 300 tonnes of nitrogen fertilisers on board would be equivalent to discharging the sewage of most settlements on the Black Sea coast at a single point in the Yayla area," Greenpeace stated.

"From what we have seen so far, there is a lack of preparation, equipment and a lack of an action plan, which we find unacceptable.".

But amid poor weather conditions, some quantities were dropped in the sea and the operation was put on hold.

The country's caretaker government has stated that its priorities are to prevent potential environmental damage and protect human health.

But Bulgarian President Rumen Radev has said that the country was not prepared to deal with such an incident.

In a statement on Monday, Radev blamed the matter on Bulgaria's years-long "vicious and wasteful model of governance".

"All these bodies, built up over the years by the previous rulers, with people appointed by them, were neither prepared, nor organised, nor were there any equipment," he told reporters.

"This will lead to algal blooms, the build-up of toxins, including the removal of oxygen from the marine environment, and the mass die-off of marine life," he said.

"There will be a direct impact on the protected areas - on the Yaila, on Kaliakra, on the reserve and its water area."

Bulgaria to hold third parliamentary election this year in November